A recent article in the Guardian was entitled :

It cited 84-year-old, He Daxing, huddled on the doorstep of his daughter's home in Chongqing who, while hundreds of millions of Chinese families toasted the New Year together, not one of his six grown children, born before the country's one-child policy was imposed, would take him in.
Filial piety is so embedded in China that officials offered to help him sue his children when he fell ill after four nights outside, since Chinese law requires adults to support their parents. Yet his case shows that traditional ideals are under growing pressure in a fast-changing, increasingly individualistic society.

The article made the following points, that China  :

*  may soon have many more 'He Daxings' as it faces a soaring number of old men and women and a shrinking number of young adults, who are also less able – and sometimes less willing – to support their parents.

* is a country where life expectancy has soared while fertility has plummeted due to strict birth control policies.

* has an economic miracle fuelled by its 'demographic dividend': an unusually high proportion of working age citizens but that population bulge is becoming a problem as it ages and whereas in 2000 there were six workers for every over-60s, by 2030, there will be barely two.

* is the first country to face the issue before it has developed and one where Wang Dewen, of the World Bank's China Social Protection Team has said : "China is unique: she is getting older before she has got rich." 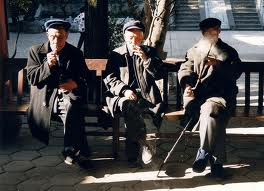 Sunday, 8 January 2012
Britain maybe no country for old men but is China still one ?
http://britainisnocountryforoldmen.blogspot.co.uk/2012/01/britain-maybe-no-country-for-old-men.html