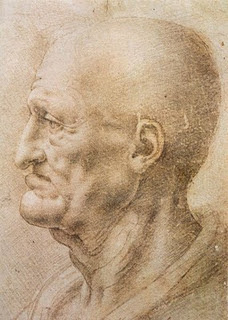 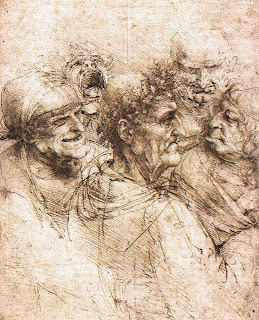 Yesterday I visited the 'Leonardo da Vinci Exhibition' at the National Gallery in London and observed at close range the 'Profile of an Old Man' drawn in pen and ink in 1500 and his 'Five Characters in a comic scene' drawn around 1490 with another interpretation being that the old man was being distracted and robbed by gypsies.

They date from the time when Leonardo was the painter at the Court of Ludovico Sforza in Milan and both of them reinforce my conclusion that : Renaissance Italy was No Country for Old Men.

P.S. This old man found that to be able to observe the assured pen stokes of his genius at close range, a humbling experience.

Leonardo's sketch of himself in his sixties before he died in France at the age of 67 in 1519.

Labels: Milan at the time of Leonardo