Britain maybe no country for old men but is China still one ? 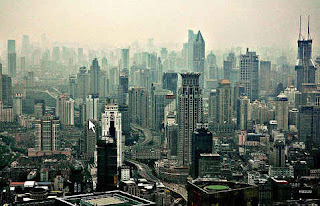 QUESTION : where are all these old men and women going to live ?

Previously, they had no choice but to live with one of their children because of the shortage of housing. The 'one child' policy in China, however, has meant that some single children are preparing to care for group of as many as six parents and grandparents.

QUESTION : What is happening to the Chinese tradition of 'filial piety' which long decreed that elderly parents should never live alone ?

ANSWER : Cultural change has eroded it to the point at which more than half of old people, with a far higher proportion in big cities, already live apart from their children and the Government recently introduced a law to 'compel' adult children to visit their elderly parents.

QUESTION : What do old men and women think about the change ?

ANSWER : Apparently, many of them welcome the change and according to one study, 26% of those surveyed saying they would agree to live in a retirement home.

“The silver industry is still in its infancy,” said Yoko Marikawa, who runs a speciality business consultancy on retirement complexes, and coined the term “silvertowns”.
She said that investors had previously shied away from the industry for cultural reasons: “People think oriental culture is very different from western culture, investors think that is a disadvantage.”

'Cherish Yearn' is relatively expensive but it offers perks such as a sports club and hospital and personal assistants to arrange the social life, health, shopping and entertainment of residents and Xi said 85 % of places have been sold and he nevertheless intends to open more 'Cherish Yearns'. “The richest people in China are the elderly,” he said.
http://www.youtube.com/watch?v=fQiGc922YIE 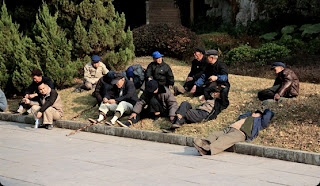 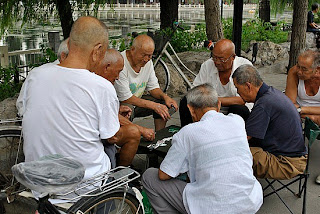 However, an article in 'Bloomberg News' entitled : China No Country for Old Men as ‘Demographic Tsunami’ Begins, presents quite a different picture .

It focused on 90 year old Wang Fuchuan who :

* lay in bed wearing a quilted black jacket, with two comforters pulled up to his chin to keep out the chilly November air because the heating at Beijing Songtang Caring Hospice was broken and his nostrils were stuffed with toilet paper to stop them dripping.

* had cockroaches scurry across the floor of his room, which had no running water or toilet and his possessions, a few articles of clothing, in a plastic bag under his bed next to a pink wash bowl with a sliver of soap and his only entertainment from a transistor radio.

* counted himself lucky because while he had no family or savings, fought against the Japanese and Kuomintang in the 1940's, so the Government pays the clinic’s monthly fee of 2,000 yuan ($318) and his 200-yuan pension buys food.

* said : “A lot of people my age can’t afford to be here. The food isn’t too good, but I have nothing else to complain about.”

Labels: Is China a country for old men ?