Britain, no country for old men who suffer from 'silver inflation' fear not, your future is in the sympathetic hands of your politicians ! 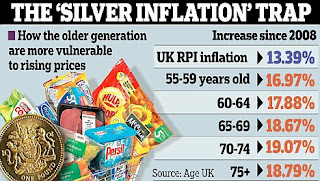 An article in the Daily Mail yesterday was entitled :

Elderly hit by 20% rise in living costs: Pensioners suffering most as household bills soar. Pensioners have to find an extra £1,000 a year to maintain living standards

It made the following points, that old men and women :

* spend more on energy and food and are being hit hardest by price rises, with a ‘silver inflation’ rate which far outstrips that faced by the rest of the population.

* have seen the cost of living rise by nearly 20% since 2008, which means they are having to find an extra £1,000 each year to maintain the same living standards while married couples have seen their state pension increase by just 12.6 % , equating to an annual increase of around £950.

Ros Altmann, Director-general of Saga, said the rise in living costs were a life or death issue :
* ‘Older people remain worst hit by rising costs of living. We are deeply concerned about how these abnormally high levels of inflation are impacting on pensioners in particular.

* Last year, nine pensioners died every hour, due to the cold. With reduced Winter Fuel Payments this year and record high fuel costs, these 'excess winter deaths' could rise.

* Policy makers have not fully factored in the dangers of inflation for our nation. Low interest rates on savings and high inflation are robbing older generations of their spending and are hugely damaging to older people’s lives.’ 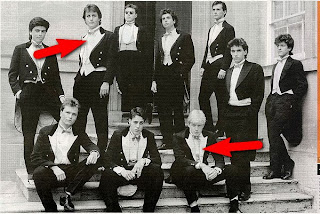 Old men of Britain fear not! You have both 'sympathy' and 'empathy' from two men in high places in the shape of the Prime Minister, David Cameron in the back row and the Mayor of London, Boris Johnson in the front row of 'The Bullingdon Club' when they were students at Oxford University in the 1980's.

* was founded over 200 years ago as a 'hunting' and 'cricket' club but by the late 19th century, the present emphasis on 'dining' began to emerge and by 1876 'cricket there was secondary to the dinners and the men were chiefly of an expensive class'.

* was reported in 'The New York Times' in 1913 as representing 'the acme of exclusiveness at Oxford. It is the club of the sons of nobility, the sons of great wealth; its membership represents the 'young bloods' of the university'.

* has restricted membership and elections twice a year, when successful new members are expected to consume the contents of an entire tin of Colman's powdered English Mustard, followed by the room being 'trashed' as a symbol of their election.

* has a 'modus operandi' to book private dining rooms under an assumed name, as most restaurateurs are wary of the Club's reputation for causing considerable drunken damage during the course of dinner.

Old Men of Britain take heart. With your future in the hands of politicians with shared backgrounds like this, all shall be well !

'When Boris Met Dave' programme on the two men at Oxford on Channel 4 :
http://www.channel4.com/programmes/when-boris-met-dave/4od

Tuesday, 16 August 2011
Britain is a country where old men fear not, knowing their 'men of the people' Prime Minister and Mayor of London, shall make all well