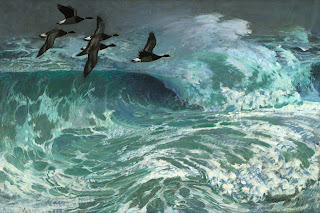 What you possibly didn't know about Keith, that he :

* began his travels as a boy when his family moved to Australia and returned after five years when he continued his education at the private Oundle School.

* during the Second World War served in the RAF in Europe and the Far East and painted war scenes with the Army and Naval Coastal Forces, then worked in the family aviation business as salesman and pilot for 15 years, painted in his spare time then full time.

* in the early 1950's had 2 books of paintings, drawings and essays published called 'Tidelines and Wake' , which were largely concerned with his other great interest, small boat sailing, in which he represented Britain and won in international dinghy events.

* was a friend Peter Scott, the son of Captain Scott of the fated 1912 Antartic Expedition who was a conservationist and fellow painter with whom he visited Antarctica.

* was a presenter on the BBC Children's tv programme 'Animal Magic' with Johnny Morris and of the ITV series, 'Animals in Action' :

In 1980 sketching the biggest tail in the world :
http://www.wildfilmhistory.org/film/292/clip/807/Sketching+the+biggest+tail+in+the+world.html

* produced his book, 'Ship in the Wilderness: Voyages of the MS Explorer through the Last Wild Places on Earth', recording his voyages through the Arctic, North-West Passage, the Galapagos Islands, South Atlantic, South Pacific and the Antarctic.

* has said :
"A good landscape painting is not just a demonstration of competent application of paint. It must offer a feeling of homage to the subject."

" Keep a record of every picture you paint, have them photographed and write down where they went. Some day, when one reaches a great age, there will be calls for a Retrospective Exhibition of a life's work."

" I would warn very sincerely against the pitfalls of copying photographs. A frozen, split-second bears little relationship to the continuing process of living reality. It is better to look, look again, and keep on looking."