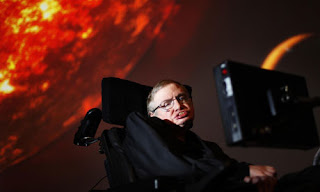 Stephen Hawking, who is 70 years old today, was diagnosed with motor neurone disease when he was 21, shortly before his first marriage when doctors said he would not survive more than 'two or three years'. He gradually lost the use of his arms, legs, and voice and as of 2009, has been almost completely paralysed. 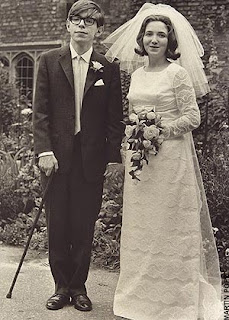 What you possibly didn't know about Stephen, that he :

* was born in Oxford during the Second World War because his father, a medical researcher in London, decided to go there, where it was safer away from German air raids.

* moved back to London after the War, then to St.Albans and in 1959, gained a scholarship place at Oxford University, specialised in physics, earned a First Class degree, then moved to Cambridge, where he began researching 'general relativity and cosmology'.

* in 1963, entered a hospital after noticing that his motor control accuracy was declining and diagnosed with 'Lou Gehrig's Disease', doctors predicted that he would not live long enough to earn his doctorate which he got in 1966.

* began his teaching career which led to in 1977 to being made Professor of Gravitational Physics and in 1979, was appointed 'Lucasian Professor of Mathematics', a Chair previously once held by Isaac Newton.

-black holes could emit radiation
- theorized that the 'Big Bang' had produced objects that weighed 10^9 tons, yet were as small as protons
- put forward his 'no boundary proposal', which stated that time and space are finite in extent, but have no edge or boundary

* in 1985 suffering from pneumonia, doctors told his wife that it would be best to let him die, she refused, took him to a hospital in Cambridge, where a surgeon performed a tracheotomy which saved his life, but destroyed his ability to speak.

* overcame his new disability, with a machine which synthesized speech based on the vibrations in his trachea.

* in 1988, published 'A Brief History of Time', which remains one of the best selling science books in history and has sold 10 million copies worldwide.

* despite of his disability and confinement to a wheelchair, continues giving lectures and studying cosmology and had scientists assemble in his honour at Cambridge University on Thursday and Friday this week to raise a toast and take stock of the scientific fields to which he has applied his considerable brain power during his career.

* received the tributes of "bold", "provocative", "relentless", "witty" and "an inspiration" from his fellow scientists.

Discusses his stint on 'The Simpsons' :
http://www.youtube.com/watch?v=ei-pKsNiINk


Stephen, who stated that he is "not religious in the normal sense" and believes that "the universe is governed by the laws of science. The laws may have been decreed by God, but God does not intervene to break the laws " meets the Pope : 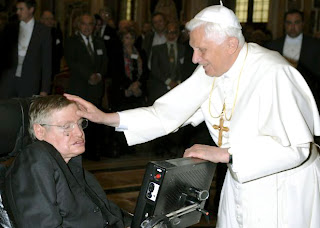