Britain, a country where old men can expect to lead 'short' healthy lives before they get sick and die

According to a report from the 'Global Burden of Disease' based on data collected by the 'Institute for Health Metrics and Evaluation' in Seattle and published in the Lancet Medical Journal, old men and women in Britain : 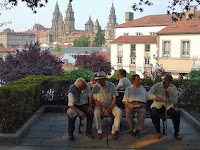 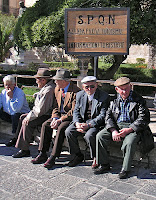 .*  can expect to live on average, 68.6 healthy years and are in 12th place out of 19 countries with similar affluence and comparing poorly to 70.9 years in Spain (left),70.2 in Italy (right0 and 70.1 in Australia in the top three places 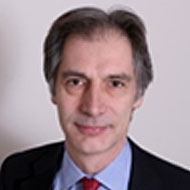 * although their life expectancy has improved by 4.2 years between 1990 and 2010, that of old people in other countries has improved faster.

* have the length of their healthy lives reduced by their diet, drinking and continuing smoking habits with one of the Report's authors, Prof John Newton, 'Chief Knowledge Officer of Public Health England' saying :

"I'd be very surprised if it was the healthcare factors that are making the difference. It is more to do with a culture of supportive communities, people's lifestyles and their diets. It is more the propensity not to stuff yourself with all the wrong things, which we are rather good at."

* have been dieing from much the same things over the last 20 years with the top 5 killers being stroke, heart disease, lung cancer and lower respiratory infections with smoking a risk factor for all  and Alzheimer's disease up by 137% and now the 10th leading cause of death.