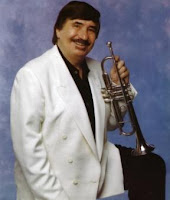 Kenny Ball, jazz trumpeter and bandleader has died at the age of 82 and although I wasn't a fan, the music of his band were there in the background in my teenage years,  appealing as it did to my elder brother's pre-War, 'jazz' and pre-rock and roll genearation. I was 15 when he released his most famous recording, ' Sukiyaki' in 1962 :
https://www.youtube.com/watch?v=WeCAQmxq_Ew&list=PL3E45BEE58800E640

What you possibly didn't know about Kenny, that he :

* was born in 1934 in Ilford, East London, the youngest of nine children where his father, who had fought and been decorated in the First World War, kept the family going throughout the 'Hungry 30's' on his wages as a bookbinder.

* took part in family Sunday afternoon singsongs and played the harmonica with the rest of the family joining in on an array of instruments and left London to return in 1940, as he said : "just in time for the Blitz", with the family living close to the railway bomb target in Goodmayes.

* was a keen member of the local sea cadets, where he became a bugler and got a tumpet for £10 after the War in 1947 at the age of 13, via an advertisement in the 'Melody Maker' and inspired by Harry James, started to play jazz with friends.

* left school at 14 to work as a messenger for the advertising agency, J Walter Thompson, the first of a succession of jobs taken while he honed his jazz skills at night.

* was engaged to a girl called Betty at the age of 17 and married at 23 and spent his National Service as a craftsman in the Army in the Royal Electrical and Mechanical Engineers and played in a trio in the Naafi.

* after the Army, balanced a variety of day jobs with gigs in Soho, often working with the trombonist Charlie Galbraith and at the age of 20 in 1954, was approached by the clarinettist Sid Phillips, whose cleancut Dixieland jazz was popular, to join his band at the "handsome salary" of £30 a week.

* was busy, with radio broadcasts and road tours and one-off occasions such as the 'Christmas Staff Party' and by 1958,  was ready to form 'Kenny Ball and His Jazzmen' and enjoyed success through their regular spot on the BBC radio programme, 'Easy Beat' and performance in the tv shows, 'New Faces' and 'Top of the Pops'. 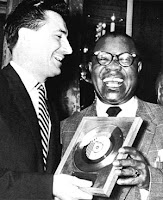 * had hit singles at the age of 25 in 1961 with Cole Porter's 'Samantha' and 'Midnight in Moscow', which stayed in the top 10 for 21 weeks, sold a million copies, going to No 1 in Australia, Canada, Sweden and Japan and was covered by a host of US jazz bands.https://www.youtube.com/watch?v=Cn8Os8nig74
and Kenny received his gold disc from Louis Armstrong.

* enjoyed success with tours in Japan and the Soviet Union, seasons at the London Palladium, tv appearances with 'Morecambe and Wise' https://www.youtube.com/watch?v=1aoD5XB2eEc played in New Orleans as part of a British Week, supported Louis Armstrong in 1968 on his last European tour.

* until the age of 68 in 2002, continued, with 'The Jazzmen' to perform 150 dates a year and made his last appearance with them was in Germany in January.with his core audience staying loyal to the end.

Kenny said : "My mission in life is to set people's feet tapping."

Not a bad ambition and one he more than fulfilled over his 60 years as a professional musician.