Edward Petherbridge, 76 year old actor, painter and writer, is performing on stage at the moment in a two-hander devised with Paul Hunter at Liverpool's 'Unity Theatre' before touring to the 'Salisbury Theatre' and the 'Young Vic' in London in a production called 'My Perfect Mind'.
http://www.youtube.com/watch?v=VWA4M02bi2Y

After more than five decades as one of Britain's most dependable and distinguished thespians, Edward had never had the chance to tackle an actor's biggest challenge - a lead role in one of Shakespeare's great tragedies, 'King Lear'. So, in 2007, when he was 71 and got an email came asking him to play Lear in New Zealand , had no hesitation, saying : "I'd have gone to Timbuktu."  Unfortunately, two days into rehearsals he suffered two strokes which scuppered the production but is now back on stage, five years later, having turned his experience into a new show.
http://www.bbc.co.uk/news/entertainment-arts-21689435

What you possibly didn't know about Edward, that he : 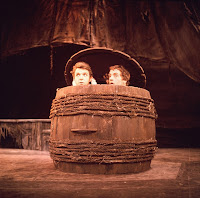 * was born in West Bowling in Bradford, Yorkshire, attended Grange Grammar School, trained at 'Esme Church's Northern Theatre School', made his stage debut at the Ludlow Festival in 1956, playing Gaveston in Marlowe's 'Edward II', made his first London appearance at the Open Air Theatre, Regent's Park in 1962, playing Demetrius in 'A Midsummer Night's Dream'.

* began his tenure as part of Laurence Olivcier's 'National Theatre Company' in the 1960s, walking on in Olivier’s 'Othello' and later creating the role of 'Guildenstern' in Tom Stoppard's 'Rosencrantz and Guilenstern Are Dead' (right on the left).

* was a leading actor in the 'Royal Shakespeare Company' and R'oyal National Theatre', was a founding member of the Actors' Company and in 1972 starred as Lorenzo in a BBC production of 'The Merchant of Venice', featuring Maggie Smith as Portia.
https://www.youtube.com/watch?v=LrS7DUyycrs 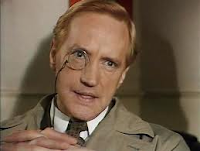 * gained national recognition as Lord Peter Wimsey on tv in the 1980s in the 'Dorothy L. Sayers Mysteries'.
https://www.youtube.com/watch?v=UIXYjQLB0DU

*  maintains a weekly blog, which often features his poetry, artwork and short films.http://petherbridgesweeklypost.blogspot.co.uk/