Britain, in the grip this bad winter, is no country for those cold, old men for whom it will be their last 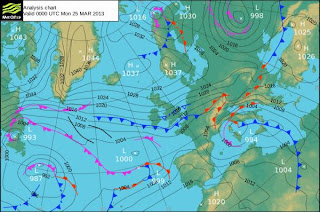 It's cold in Britain as it is in Northern and Eastern Europe with cold air drawn down from the Arctic by high pressure over Scandinavia and this month in Britain is on track to be the coldest March for 50 years. In fact, this is the fifth cold spell we've had this winter and I have no doubt that the number of old men and women who have and will die as a result will exceed the additional 24,000 who died last winter. Most of them will be over the age of 75, with underlying medical problems exacerbated by living in homes, cold through poor insulation with high energy bills causing them to cut back on energy consumption.

A report by 'Age UK' last year estimated that cold homes are costing the National Health Service in England £1.36billion a year in treatments, mostly for cardiovascular diseases such as strokes and heart attacks. Many more old men die in Britain than countries in Scandinavia which have much colder winters but where there has been huge investment in insulating homes.

"The figures demonstrate that if you are a vulnerable person living in England or Wales then even a comparatively mild winter can still be deadly. The fact that our Scandinavian neighbours experience much harsher winters and have nowhere near the same level of winter deaths means that we should not accept this as inevitable."

Excess deaths among old men and women last winter 2011/12, which was relatively mild, were down by 8% compared with the previous year, but Michelle Mitchell, Charity Director General of 'Age UK' said :
"Every single excess winter death is preventable. The only way to make a sustained and long-term impact on excess winter deaths is by investing in making Britain’s homes more energy-efficient.Those living in the coldest homes are three times more likely to die a preventable death than those living in warmer ones. The Government must also invest in a major energy-efficiency programme to help insulate older people against the cold weather and the high cost of energy."

Dave Timms, of Friends of the Earth’s 'Warm Homes Campaign' said :
"The Government must take action to tackle this homemade humanitarian disaster by ensuring we all have warm and energy-efficient homes."

As the bitter Arctic conditions caused blackouts and traffic chaos yesterday, experts warned of an 'horrendous' death toll among old men and women this winter.

Earlier posts where I considered winter as the enemy to old men :


Britain is no country for the cold, old men who will die this week


Britain, no country for poor old men who can't afford to heat their homes in what might be their last winter... fear not !


Britain in a harsh winter is no place for old men