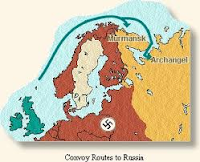 During the Second World War, Britain’s Prime Minister, Winston Churchill, promised to supply our Russian ally, Stalin with war supplies to fight Germany on the Eastern Front, knowing that, if Russia fell, the full weight of the German military machine would be targeted on Britain. As a result, over four years British naval and merchant seamen on convoys :

* used the only way to get the goods to Russia, through the northern ports of Murmansk and Archangel, both inside the Arctic Circle.

*  lost 3,000 men in the sub-zero temperatures, ferocious seas and a gauntlet of German warplanes and U-boats.
https://www.youtube.com/watch?v=h7IaIjc-YcI

After the War, the survivors of the convoys :

* did not have their contribution and sacrifice because, with the onset of the 'Cold War' and hostility against Russia, it was deemed unacceptable to recognise the efforts of the men who had supported our erstwhile ally. 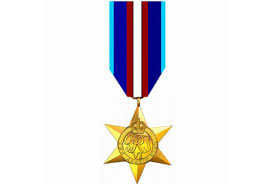 * are finally to have campaign medals, recognising their heroism and bravery, pinned to their chests hanging from a ribbon with a central white stripe, emphasised by black edging, marking the Arctic and embossed with King George VI’s cipher, the letters G, R and I and carrying the words ‘The Arctic Star’. 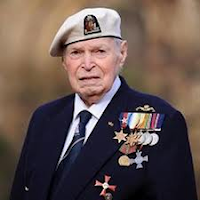 The survivors were led in their 16 year campaign for justice by 93 year old Commander Eddie Grenfell, who
miraculously survived ten minutes in the icy Arctic waters before he was rescued after his ship SS Empire Lawrence was bombed in May 1942. His daughter said, since he is in hospital, that :
"This absolutely wonderful news. I know he can’t wait to hold the medal in his own hand and wear it on his chest."

"The ships were solid with ice. If you put your hand on a rail without gloves on, you’d strip the skin off. Sometimes the ships would tilt to 45 degrees, so we had to clear the ice quick. We came dangerously close to the ice taking us over. The most horrendous thing I remember is when an oil tanker got hit by a bomber. It broke up and there were huge flames. There were men on fire falling over the side in to the freezing sea that was also on fire because of the oil on the water. There are things that never leave your mind. Sometimes at night those terrible images will invade my dreams. It never leaves you."


Lieutenant Comander Dykes said:
"It was gale force wind after gale force wind coming from all different directions.
The spray would turn to ice on your face. Your eyebrows and nose would be covered in ice.

It was horrendously cold in every way imaginable, but we had to keep going out and chipping the ice off the ship because if it built up too much we could go under. It wasn’t just the weather, though. There were enemy attacks from dive bombers and torpedoes on an hourly basis at times.
We would be at action stations for weeks on end and we’d live off cold food because the chef would be too busy supplying ammunition to cook anything - not that we had much time to think about eating at all. The saddest part of all of this, though, is that many of our comrades are no longer alive to see this historic day. The fact it took 70 years to get to this stage is nothing short of a tragedy and a disgrace. I hope it never, ever happens again. Now it’s time to celebrate and we’ll be observing the grand old naval tradition of splicing the mainbrace tonight."
https://www.youtube.com/watch?v=YbLsKKyfl3I

"After they woke up, all hell broke loose. They shifted all their most able Luftwaffe squadrons and U-boats to Norway and we’d be under constant attack from the air and sea. You’d hear a horrible bang and one of the ships would disappear. Once I was moving across the deck and there was a huge explosion. I saw a column of smoke and fire and one of the ships start to sink. The poor blighters on board didn’t stand a chance. We heard ships call for help but couldn’t do anything about it.’


An old 92 year old sailor called Bruty who spent the whole of the War on HMS London wrote to the Queen last year, urging her to support the campaign and said :


"I'm told there are only 200 of us left and we’ll lose some of them before the summer, but at least they’ve agreed to give the medal posthumously.”

Britain, a country where politicians take 70 years to find it politically acceptable to recognise its heroes.