Britain is no longer a country for and says "Goodbye" to an old tv production designer and father of the Daleks in 'Doctor Who', called Ray Cusick

Ray Cusick, tv production designer, who was asked in 1963 to create an alien race for new kids' science fiction series, 'Doctor Who' and came up with the Daleks, died last month at the age of 84.


What you possible didn't know about Ray, that he :

* was born in 1929 in Lambeth, wanted to be a sculptor and, in his teens, attended evening classes at art school, but his father felt he should pursue a more practical path and so studied science and maths at Borough Polytechnic which he did not enjoy it and enlisted in the Army and served in Palestine.

*  did not enjoy the Army, returned to Britain, completed a teacher training course, then obtained a nine-month position in repertory theatre at the Prince of Wales Theatre in Cardiff.

* in the late 1950s, took a position teaching art, then noticed an advertisement placed by Granada Television for designers on 'Chelsea at Nine', then joined the BBC as design assistant in 1960 and then worked on 'Doctor Who' stories, designing not just futuristic settings but also historical sets and diorama.

* in 1963 was given the job to design the alien Daleks after another designer, future film-maker Ridley Scott, was unable to do it because of a conflict of schedules.

* said that inspiration for their design of the Daleks came from a lunch with the special effects expert, when he picked up a pepper pot, moved it around the table and said: "It's going to move like that – no visible means." and then came up with the machines' distinctive look :bobble-like sensors, eyestalk, sucker and exterminator weapons.
https://www.youtube.com/watch?v=ydC2EPQIURU 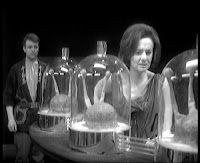 * over the next two years, worked on 'Doctor Who' adventures which required new sets each week with hideous brains in jars in 'The Keys of Marinus' in 1964 https://www.youtube.com/watch?v=tMustjkpwDI followed by a lethal jungle the next and a snowy vista after that. 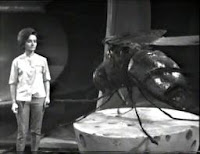 *  felt that the show's low budget was stretched thinly, but was assisted by  low-resolution tv picture, which, he admitted, covered a multitude of sins and with 'Planet of Giants' in 1964, made a humdrum story remarkable by his oversized science laboratory, dead insects and moving giant fly. 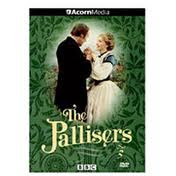 * in the late 1970s, was a designer for the James Burke BBC programme 'Connections'.

* after retiring from the BBC in 1988, ran a small hotel in South London with his wife Phyllis and followed his hobby of writing about battles from the Napoleonic Era, contributing articles to the journal of the 'Waterloo Association'.

* in 2008 he appeared in an episode of the BBC documentary series, 'Doctor Who Confidential', when he spoke of the original Dalek design and how the concept came to fruition.
https://www.youtube.com/watch?v=86dIpygbYSU 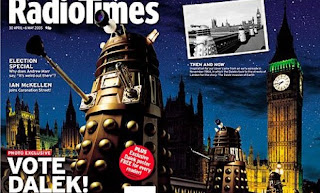