Britain is a country whose lonely old men in England have a champion in their new public health chief, Duncan Selbie

Duncan Selbie as Chief Executive is attempting to help bring about a sea change in public healthcare and is touring the country, forging relationships with councillors and local officials, in his attempt to achieve this. He told the County Counillors for Kent in the County Hall in Maidstone :

"Ask Age UK. Being isolated and living alone shortens life and increases disability. It is equivalent to 15 cigarettes a day. How many in your community are over 65 and living alone?" He suggests calling on the help of the voluntary sector  "There is an army waiting – everything from faith groups to the British Red Cross. It is stunning."

What you possbly didn't know about Duncan, that he :

* was brought up in Dundee in Scotland in a family of four children where his mother died when he was 13 and he left school at 15.

* later said : "My father was a good soul, but not involved. We all sat together – there were four of us and Dad, and he said: 'Well, I don't know what to do.' School was violent and that was just the teachers. I had to get a job."

* went to Grove Academy for a year and at 16 got a 'National Certificate in Administration' with the highest marks in Scotland and at 17, got a clerical job in the health service, working on prescription pricing cards. 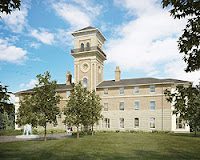 * at 19 he moved to London and worked as a cashier at Queen's Hospital in Croydon.

* is unusual in the National Health Service for his non-medical, non-academic background and was turned down in his application for 13 'chief executive' jobs before stepping into his boss's shoes at a psychiatric hospital, where he implemented the first 'integrated mental health and social care service' in the country.

* said, in his first interview with a national newspaper, after becoming Chief Executive last summer that : "It's all so straightforward, it really is. We've become, certainly in recent years, comfortable with talking about what kills you – mortality. Where we've still got massive progress to be made in being able to talk comfortably about what ails you. What ails you isn't necessarily what kills you."

What Duncan is saying is that :

* what is 'ailing' an old man may be musculoskeletal pains and depression.
* he probably does not need hospital.
* what about physiotherapy for his arthritis ?
* how about tackling the causes of  his depression?
* a lot of depression is associated with isolation.
* if he is on his own, he is more likely to be depressed and suffer from these pains.

Duncan's job in promoting change is important, since the 152 local councils in England are about to take over the public health budget, worth £5.45bn over two years and ringfenced for 'public health' rather than 'hospital care' for the first time and where their 'Health and Wellbeing Boards' must decide how to tackle everything from smoking and obesity to sexual health and loneliness.

In dealing with local councillors, Duncan  :

* uses gentle persuasion and self-deprecating humour as he tosses the ball firmly into their court.

* doesn't tell them what to do but incites them to act and if they are doing something already, to do it better.

* calls for passion: a belief that they can transform their local society and help their lonely citizens.

* will, nevertheless, publish everything they are doing and will make it obvious when things are not working.