Britain is still a country for and says "Happy Birthday" to an old comic book sports artist, creator of 'Roy of the Rovers', called Paul Trevillion 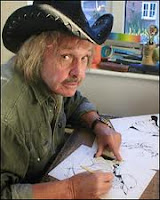 Paul, who has been illustrating comic books for fifty years, is 79 years old today.

Things you possibly didn't know about Paul, that he :

* was born in Tottenham, North London in 1934, five years before the outbreak of the Second World War and produced artwork for publications like the boys' Eagle' comic and TV21 while still at school.

* from the 1960s to the 80s, devised and illustrated pieces for the main British newspapers from 'The Sun' to 'The TImes' and in 2006 revived his cult football cartoon, 'You are the Ref' made famous by football magazine 'Shoot' for 'The Observer' in the 1970s.

*  spent much of the 1960s in the US working with Mark McCormack at IMG for some of the world's biggest brands and was the author and illustrator of over 20 books sold worldwide and also the' Gary Player Golf Class' which appeared in over 300 newspapers worldwide.

* has worked as a stand-up comedian and supported the late Norman Wisdom and Bob Monkhouse, had a record deal, was crowned world speed-kissing champion and invented a split-handed golf putting technique,

* was interviewed in the award-winning documentary 'Roy' directed by Luke Dormehl, about the life and times of 'Roy of the Rovers', his character in 'The Tiger' the 1950s and saw the film shown at the 2009 Cannes Film Festival and win 'Best Documentary' at the End of the Pier International Film Festival.