* was born 'Maurice Micklewhite', of part Romani and Irish blood, in Rotherithe, the South London borough next to the one where I was born, Lewisham*, and the one in which my Father's brother, 'Uncle Bill,' once lived and where Michael's mother was a cook and charlady while his father worked as a fish market porter. 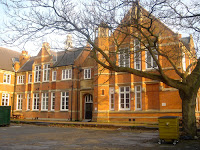 * at the age of seven in 1940, was evacuated from the bombing of London to Norfolk during the Second World War and then, back in London, educated at Wilson's Grammar School in Camberwell, which he left at the age of 16.
http://www.wilsonsschool.sutton.sch.uk/ow/ow.html

* lived with his family in a prefabricated council house at the Elephant and Castle
and later said : "The prefabs, as they were known, were intended to be temporary homes while London was reconstructed, but we ended up living there for eighteen years and for us, after a cramped flat with an outside toilet, it was luxury."

* worked as a filing clerk and messenger for a film company in London until he was 'called up' to do his 'National Service' in the Army in 1952 and served in Germany and then on 'active service' in the Korean War in 1954.

* got a job at the Horsham based 'Westminster Repertory Company' to play 'small butch parts like policeman' and in his first role as one, his first line should have been "come along with me" as he arrested the villain of the piece, but walked on with his flies undone and was greeted by the audience laughing and forgot his line.

* after two months, developed malaria stemming from Army Service in Korea and by the time he had recovered, the theatre company had 'gone bust' and years later sent the destitute theatre owner a cheque at the time he was dieing in hospital, which was returned uncashed after the old man had shown the hospital staff his 'proof' that he gave Michael his first job.

* followed 'Zulu' with 'The Ipcress File' in 1965, in which he played the spy, Harry Palmer and 'Alfie' in 1966 where he played the womanising Londoner and title character.
http://www.youtube.com/watch?v=4i49XISKA48

* made his first film in the USA in 1966, after an invitation from Shirley MacLaine to play opposite her in 'Gambit'.

* in 1970 worked on The 'Italian Job':
http://www.youtube.com/watch?v=FEltJsIwSvE

and played the lead in, in my opinion, his best film, 'Get Carter' in 1971 and the street used for filming in Gateshead was the one where my friend D.B's 'Uncle Bill' once lived.
http://www.youtube.com/watch?v=AgU1L1z-Zx4

* played the the commander of a Second World War Luftwaffe brigade, disguised as Polish paratroopers, whose mission was to kidnap or kill the British Prime Minister in 'The Eagle Has Landed' in 1976 :
http://www.youtube.com/watch?v=ddNYvUVCpjI

* had a lean time in the 1990's as he found good parts harder to come by but had a high point when he played Ebenezer Scrooge in the critically-acclaimed Muppet Christmas Carol in 1992 :
http://www.youtube.com/watch?v=Bpb9EbmvM5M

* released 'Harry Brown', in 2009 :
http://www.youtube.com/watch?v=OVOSfHFNlcI
and in 2010 appeared alongside Leonardo DiCaprio in 'Inception'.


Michael's strong views about Britain are reflected in the fact that, he :

* left it in the 1970's, citing the 82% tax levied on top earners by the Labour Government and returned several years later when taxes were lowered saying :
"I was never going to come back. Maggie Thatcher came in and put the taxes back down and in the end, you know, you don't mind paying tax. What am I going to do? Not pay tax and drive around in a Rolls Royce, with cripples begging on the street like you see in some countries?"

* in 2009, openly criticised the Labour Government's proposed new 50% tax on top earners saying :
"The Government has taken tax up to 50% and if it goes to 51, I will be back in America...... We've got 3.5 million layabouts laying about on benefits, and I'm 76, getting up at 6am to go to work to keep them. Let's get everybody back to work so we can save a couple of billion and cut tax, not keep sticking it on."

* following the launch of his film 'Harry Brown', called for the reintroduction of 'National Service' in the Armed Forces to give young people : "a sense of belonging rather than a sense of violence".

Michael interviewed in the year 2000 :
http://www.youtube.com/watch?v=OPT8zaFtieY