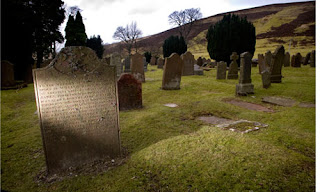 A Survey by 'Dying Matters', a coalition backed by several major charities which promotes discussion of end-of-life issues, stimulated an editorial in 'The Guardian' led with :

For Larkin, unresting death twitched at blackened curtains, and in Britain dying has often been the stuff of private nocturnal anxieties, as opposed to conversation lit by day.

It made the following points,that :

* despite signs of some mortal taboos losing their grip, when it comes to chewing over the practicalities of breathing our own last, most of us are as inhibited as ever.

* even business-like issues are often passed over in silence with more than a third of us saying we have never asked any relative about whether they have written a will, funeral arrangements, the final form of care they want or where they would prefer to die.

* across the whole population, fully 70% tell strangers with clipboards they would rather die at home and yet the official figures record that more than one death in every two ends up being in a hospital bed.

* almost as many fear a 'hospital death' as 'dying alone or 'falling prey to violent crime'.

The Editorial made the point that :

No, the chief obstacle to dying better is nothing as worldly as cash. The real trick is finding the courage to face up to the inevitable, and then opening up as well. If we could only do that, then we could plan – before it is too late.

Thomas Hughes-Hallett, of the charity Marie Curie, said:
"The historic reluctance of people to discuss their own death, reflected in this poll, has contributed to the fact that while the overwhelming majority of us would like to die at home and few of us would like to die in hospital, the reality is well over half of us will continue to die in hospital, precisely the place that when asked we would not want to be. Earlier discussions between patients, families and doctors would allow better planning and allow more people to achieve their choice."

His views are borne out by the survey's detailed exploration of serious fears, which revealed that people were frightened in the following proportions :

P.S
The question : 'How can I allay my fear of death ?' in the 'Guardian produced the following replies :

* By coming to terms with that fact that you were actually dead for the 13 billion years before you were born and it didn't cause you the slightest bit of inconvenience.
Tom from Abingdon

* What you are really concerned about is the act of dying. Be guided by Montaigne who, following a near-death experience in his youth, reflected in later years: "If you don't know how to die, don't worry; Nature will tell you what to do on the spot, fully and adequately. She will do this job perfectly for you; don't bother your head about it."
Dave from London

* Develop a belief in some form of reincarnation or spiritual afterlife. Failing that, repeat the following: "You die if you worry. You die if you don't. So why worry at all?"
Fred from London

* You probably can't. We were built to survive, so fear of death is inevitable. The obvious answer is, to get a life.
Ruby from London 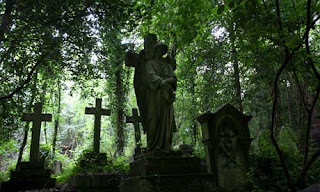 Labels: Survey about attitudes towards death