Britain is no country for old men and in paticular, thirsty ones in hospital in Worcester, Ipswich and Hampstead 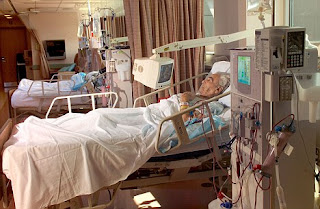 A report for 'The Care Quality Commission' into hospital care for old people has revealed :

* three hospital trusts in England where standards of dignity and nutrition for older patients were 'not meeting the basic standards which they are legally obliged to deliver' as The Worcestershire Acute, Ipswich and Royal Free Hampstead in North London.

- not being helped to eat and drink, with their care needs 'not assessed and their dignity not respected'.

- not having regular checks of their weight and not identifying those who were malnourished.

- having too little to drink because fluids were either left out of their reach or they received no fluids for a long time and one clinician who had to prescribe water to a patient to ensure they got enough to drink.

- being talked to in a condescending or dismissive way.

- not being involved in their own care, for instance, by not explaining treatment to them in advance or not seeking their consent.

The Commission's findings come after the 'Patients Association' exposed appalling care received by some older patients and the charity Age UK's 'Hungry to be Heard Campaign', which revealed major weaknesses in National Health Service feeding practices, such as elderly patients becoming or remaining malnourished while in hospital.

Dr Peter Carter, General Secretary of the Royal College of Nursing, has said: