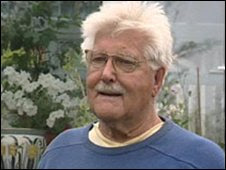 The Guardian newspaper had an article today entitled :

It involved the 86 year old John Catt, who had his presence at 'peaceful protests', systematically 'logged' by a secret police unit over four years.

It made the following points, that John :

* has been granted permission to launch a lawsuit against police chiefs who classified him as a 'domestic extremist' and kept a detailed record of his political activities on a clandestine database.

* has no criminal record and is bringing the High Court action against the unit logged his presence at more than 55 'peace' and 'human rights' protests over a 4 year period.

* had his habit of taking out his sketch pad and drawing the scene at demonstrations logged and also notes on his appearance, such as 'clean shaven'.

* has started a lawsuit which will challenge the power of police to 'compile secret files on law-abiding protesters'.

* has said that he is "committed to protesting through entirely peaceful means" and was "shocked and terrified" after he saw the extent of the files held on him.

What a sad and, in some respects, sinister country Britain has become.