Britain, a country which says "Goodbye" to, remembers it once 'closed its doors' to a fearless Gurkha soldier called तुल बहादुर पुन, Tul Bahadur Pun 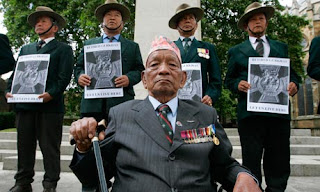 Lieutenant Tul Bahadur Pun, holder of the Vicoria Cross, the highest award for 'gallantry in the face of the enemy' in the British Army and a key figure in the campaign for 'Veteran Gurkha Soldier Rights' has died in his home village of Myagdi, Nepal. Tul was 'reportedly' born in 1923 in Western Nepal, but his true age may have been up to 92.

Things the probably didn't know about Tul, that he :

* volunteered to join as a soldier in the 'British-Indian Army' and after training was posted to the 3rd battalion, 6th Gurkha Rifles.

* fought against the Japanese in Burma in The Second World War and in 1944, when his battalion was ordered to capture a key railway bridge, heavily defended by the Japanese, founnd his Company pinned down and his own section reduced to himself and two other men.

* launched an attack on a well-fortified strong point called the 'Red House', found his two companions badly wounded in the attack, picked up their machine gun and carried on, firing from the hip as he ran across 30 metres of muddy and cratered open ground and was miraculously unscathed.

* fought his way into the 'Red House' and cleared it of at least 8 Japanese soldiers and then enlisted two captured machine guns in support of his comrades following behind and spared many men, including a Major Lumley, from further withering fire.

* saw the ensuing capture of Mogaung become a turning point in General Slim's ultimately successful campaign after the defeat of the Japanese at Kohima and Imphal.

* after the War, transferred out of the Army of newly independent India in 1947 into British service with the 2nd/6th Gurkha rifles, with whom he served in Malaya and Hong Kong, rising to the rank of Regimental Sergeant Major.

* on retirement in 1959, was promoted to 'Honorary Lieutenant' and returned to farm at Banduk.

* with rapidly declining health in 2007, was refused permission to settle in Britain on the grounds that he didn't "have strong enough ties with the UK".

* saw the decision to keep him out of Britain overturned, after protests, by the British Asylum & Immigration Minister, due to the "exceptional" nature of the case.

* became a figurehead in the actor Joanna Lumley's campaign for the right of all Gurkhas who had served four years or more with the British army and retired before 1997 to settle in Britain, Joanna being the daughter of Major Lumley.
http://www.blinkx.com/watch-video/lumley-marches-with-gurkhas/pPX6kybHjDevtdPCaVRmDQ

* was often seen seated next to Joanna at campaign events with stick, cap, suit, white shirt, regimental tie and a long row of medals, with the Victoria Cross in pride of place.

P.S.
Here is my posting about Joanna in May 2010 :
http://britainisnocountryforoldmen.blogspot.com/2010/05/britains-old-men-say-happy-birthday-to.html