Britain is a country where old men can gravitate to an old lightship called LV 21, anchored on old Gillingham Pier in the old County of Kent 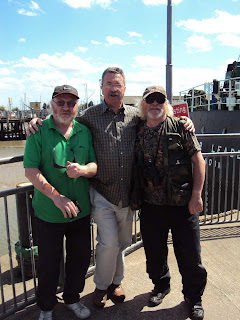 This is my good friend D.B. posing with 2 boys from Belfast, the Brothers Pearce and Alexander, who were fishing for sea bass and mullet off Gillingham Pier. 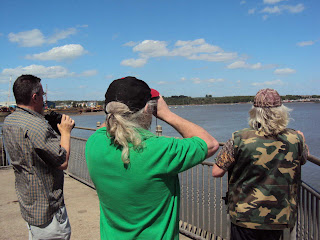 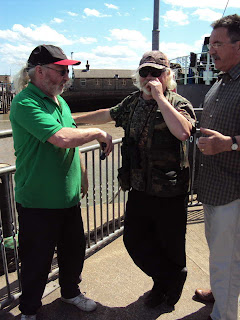 Here they are looking across the river Medway at redundant lightships anchored on the other side of the River Madway. When I aked how many there were, Pearce replied that there were " about 12!".

The topics in our conversation over the next 10 minutes ranged from how :

* Alexander had married a Scottish girl and they both loved open air music concerts in the fields for "the social crack".

* Van Morrison, at concerts was always miserable and never gave encores and how the Brothers had a cousin in Canada who followed Van around the world.

* when it came to fish, the mullet was not popular in England because it was a "bottom feeder" and tasted "earthy" and the onle people who liked it were the French.

* sea bass lived in protected breeding gounds and a virus was affecting the eels.

* the pub trade was in a sad state and had changed a lot since the Boys had themselves both been publicans.

* about 20 years ago, in winter, they had helped a 23 stone man dig his speed boat out of the mud at 2 o'clock in the morning and how they heard on the radio that the local lifeboat claimed the praise for his rescue. 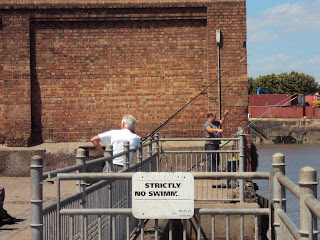 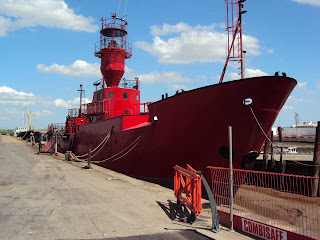 The main prupose of our visit to the Pier had been to have a look at 'Light Vessel 21'. Her history was that she was in :

http://www.feuerschiffseite.de/UNGLUCK/varnegb.htm
* 1988 converted to automatic lightvessel
* 2008 decommissioned by Trinity House
* 2009 acquired by Gary Weston and Päivi Seppälä and brought to the River Medway