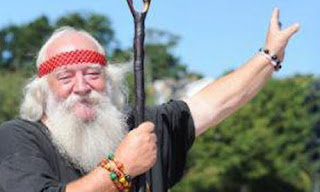 An article in the 'Gaudian' today was entitled :
Torbay's waving 'white wizard' is Moses Peter, who waves at passing traffic, merely spreading a little happiness – or a distraction to drivers?

It made the following points, that Moses :

* has become an internet sensation after waving to passing traffic with a variety of these waves in his repertoire :

- waggling his hand vigorously for youngstes, like Prince William's surprisingly childlike wave at the royal wedding.

- pointing to the sky as if he has just spotted something very significant there.

* has been waving for 7 years on the seafront road between Torquay and Paignton in Devon where, carrying a black staff, he either walks up and down or sits on either a bench or the sea wall.

* has become something of a cult figure and the subject of a Facebook page called : 'Strange Old Man Who Sits On A Bench On The Road'.
http://www.facebook.com/pages/Moses-Peter/158374134178462

* is variously described either as a 'white wizard', 'Merlin', 'Neptune' or Torbay's 'gentle shepherd'.

* has had calls for him to stand for Mayor and to turn the Christmas lights as Santa Claus.

* has had complaints that his waving is distracting drivers and the hooting of car horns that his waving prompts breaching the peace, not to mention disturbing the afternoon naps of the many elderly people who stay in the hotels that line Moses' mile-long route.

* has been 'spoken to' by the police and has said in relation to motorists :
"I can't stop them doing that. I'm just an old man doing what I do, trying to spread a little bit of happiness."

* says he began to wave after bumping into a man who asked him where the first seed for the first tree came from ? and has said : "That set me thinking . . . what's it all about?"

* thinks of his waves as "little presents" and has said : "I throw them out at the people as they pass. They catch them and throw a present back. That's all."

Labels: No country for Moses Peter of Torbay