Britain, if you are the 'angry' and 'cruel' country observed by Dame Helen Mirren, then you are certainly no place for old men 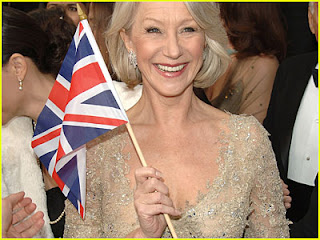 Dame Helen Mirren the British actress is 65 year years old, lives in Hollywood and is quite clear that Britain is an 'angry' and 'cruel' place and so by implication is no place for old men, old women, in fact, no place for anyone.

According to 'The Sunday Mail' Newspaper, our Dame has, 'in an outspoken interview' published in the French celebrity magazine, 'Paris Match', described Britain as country with :

* 'an angry and cruel society' which 'no longer cherishes old-fashioned virtues'.

* conflicts being 'made worse on cinema and on television'.

* people being 'nasty and cruel on the Internet'.

* a social situation now 'so depressing' that 'she feared violence'.

* an increasingly ‘savage’ Americanisation of its society unlike France which defended its own culture.

Helen, is the only person to have played 2 quientiscentially 'English' monarchs, Elizabeth I and Elizabeth II.
Here, her interview about her role in the tv series,'Elizabeth I', which she made in 2005 :

And here in the 'The Queen', the award winning 2006 British-French drama film directed by Stephen Frears, written by Peter Morgan :