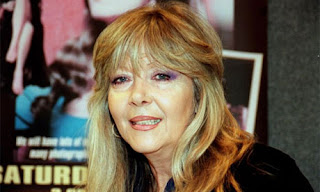 Ingrid Pitt died on Tuesday at the age of 73 and Britain's old men remember when they were young and saw her playing lusty vampires in 'Hammer' horror films in the late 1960's and early 70's.

Things those once young men probably didn't know about Ingrid, that she :

* was born Ingoushka Petrov in Poland in 1937 to a Jewish mother and a German father who was a scientist who refused to work on the Nazis' programme to develop rockets.

* was five when she and her mother were sent to the 'Stutthof Concentration Camp', where they remained for three years. "I think I first knew I wanted to act in the camp," she said. "I used to lie on the straw and try and believe I was somewhere else."

* was taken into a forest with her Mother to be shot, when they managed to escape, were rescued by partisans, spent the last year of the War living rough with them, before making their way to Berlin.

* said , "I was born into the biggest horror show of the century, the brutalities of the Nazi regime. I think it's very amazing that I do horror films when I had this awful childhood. But maybe that's why I'm good at it."

* after a brief spell as a medical student, became a member of Bertolt Brecht's 'Berliner Ensemble Theatre Company', got into trouble for criticising the communist authorities in East Berlin and made her escape to the West by diving into the River Spree.

* was helped in her escape by a US marine officer, Roland Pitt, who she married and then, after living for a period on a Colorado military base, got a divorce and returned to Europe with her daughter.

* worked in Spain, appearing 'uncredited' in several films and then in 1965, got work as an extra on David Lean's 'Doctor Zhivago' and Orson Welles's 'Chimes at Midnight.'

* played the part of a German double agent posing as a cafe waitress in the Second World War film, 'Where Eagles Dare' which had its interiors were shot in an English studio and it was at this point she began her love affair with England.

* later married the British former racing driver Tony Rudlin, settled in London and once said : It was "the longest Pitt-stop of his career."

* got her 'breakthrough' in the Hammer film 'The Vampire Lovers', where, wearing low-cut, transparent gowns, she played a 200-year-old lesbian vampire who seduced her female victims before sucking their blood.
http://www.youtube.com/watch?v=StTTfl8SU5k&feature=fvw 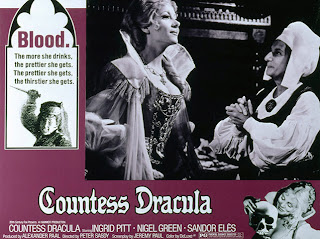 * played the title role of 'Countess Dracula', who remained youthful by bathing in the blood of virgins.

* before her death provided the narration on an animated short film about her War time experiences called 'Beyond the Forest'.

"She remained tortured by the horrors of her childhood Holocaust experiences until her sudden death. She never exploited or emphasised them in any of her work or public persona, only mentioning them in her memoir long after her film career had waned. Retelling her childhood pain for the film and its narration was an ordeal for her but as she aged, Ingrid Pitt felt it important that the public know about the millions of children who suffered during the Holocaust. She wanted to be part of a project that would remind the world of the 1.5 million children who died, as well as to protect children of all cultures today from the kind of oppression and abuse that she had endured."
Posted by ...............................JohnBoy at 09:12