Britain, once a country enthusiastic for war, thought it had said "goodbye" to it at 11 o'clock in the morning on the 11th of November 1918

The greatest conflict in world history had ended in 'a stalemate'.

No 'Coalition' could win.

It had taken the politicians and the generals on all sides and an 'ocean of blood' to reach this conclusion.

These recruitment posters were produced after the initial 'enthusiasm' for young men to 'join up' an fight for their country had subsided :

These photos of the reality of the War were not shown at home : 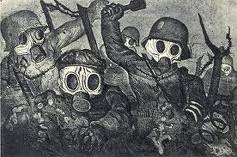 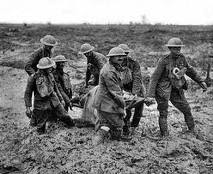 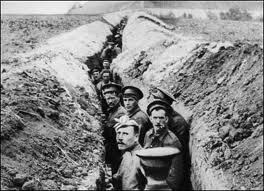 Film Makers struggled with the War but, in 1930, just 12 years after the War ended, Lewis Milestone, made :

ALL QUITE ON THE WESTERN FRONT :

We can't understand what it was like to be in the trenches and go over the top into
'No Mans Land', but for me this scene from 'Path's of Glory' gives a good idea :
http://www.youtube.com/watch?v=gPtVNDvwGMo

P.S. Kirk Douglas, the French officer, is still alive at the age of 95.

From the same film and most poignant :
http://www.youtube.com/watch?v=GObO-KRkiZA&feature=related

The film director, Richard Attenborough made 'Oh What a Lovely War' in and around Brighton when I was a student there in 1969.

Here we have his trench scene :
http://www.youtube.com/watch?v=UUHh5uAcaBw&feature=related

In this scene, my student friend, W.P., got a job as an extra and is frozen in aspic at the age of 19 in 1968. He stands, with his then ginger hair, second to the left of the Churchman :
http://www.youtube.com/watch?v=0wfIhl5mn5s

The 'Christmas truce' is based on a true incident along several miles of the front in 1914 :
http://www.youtube.com/watch?v=fHObCL2luMw&feature=related