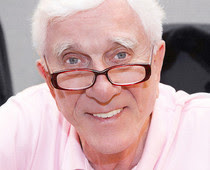 Things you probably didn't know about Leslie, that :

* his mother, born in Wales, was an immigrant from Fulham, London, and his father was a Danish-born Constable in the Royal Canadian Mounted Police whose beatings of his wife and children, made Leslie want to escape.

* his older brother, Erik, was Deputy Prime Minister of Canada during the 1980s.

* at the age of 17, enlisted in the Royal Canadian Air Force and was trained as an aerial gunner at the end of The Second World War.

* briefly worked as a disc jockey at a radio station in Alberta, before enrolling at the 'Lorne Greene Academy of Radio Arts' in Toronto.

* studied theater and music at the Neighborhood Playhouse in New York and later attended the Actors Studio before making his first tv appearance, in 1948, on an episode of 'Studio One', alongside Charlton Heston.

* made his film debut in 1956 in 'The Vagabond King'and followed this with a part in the science fiction film 'Forbidden Planet' and said of the film it was :
"Supposedly a science fiction version of Shakespeare's The Tempest, it was all about the id, or something like that. Who knows? The Trekkies today regard it as the forerunner of Star Trek. I just had to wear a tight uniform and make eyes at Anne Francis. I was pretty thin back then."

* in 1957, got the lead role opposite Debbie Reynolds in the romantic comedy 'Tammy and the Bachelor.'

* appeared on tv in 'Alfred Hitchcock Presents', 'The Virginian', and 'The Wild Wild West' and in 1969, had the leading role as a police officer in 'The Bold Ones: The Protectors'.

* appeared as the ship's captain in the 1972 film 'The Poseidon Adventure'.

* made his comedic breakthrough came with a supporting role in 1980's 'Airplane!' in which his deadpan delivery contrasted with the continual absurdity surrounding him.
http://www.youtube.com/watch?v=Qo7qoonzTCE&NR=1

* was cast in the lead role in the TV series, 'Police Squad!'.
http://www.youtube.com/watch?v=iRsmLcsP38A

* in 'The Naked Gun' played his character, Drebin, like the doctor in 'Airplane!' : seemingly unaware of the absurdity even when unintentionally contributing toward it.
http://www.youtube.com/watch?v=eJEmtLxkEoI&feature=related


* appeared in over 100 films and 1,500 television programs over the span of his career, portraying over 220 characters and was always at his best when he made us laugh.

P.S. My favourite :
I'm a locksmith from 'Police Squad' :