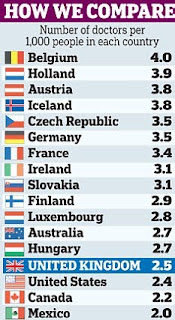 A report, by the 'Organisation for Economic Co-operation and Development', which represents 30 of the World's most industrialised nations, has estimated that National Health Service spending on high salaries for its staff is contributing to knocking three and a half years off the average Briton's life.

It makes the following points, that Britain is a country with :

* fewer doctors per head of population than most countries in the Western World and has far less hi-tech equipment, like cancer scanners, because it cannot afford them.

* family doctors who receive an average of £106,000, almost double the amount paid to French doctors and if the money was spent instead on, for example, the scanners, fewer people would die prematurely.

* one of the highest rates of avoidable deaths, with 74 out of 100,000 being preventable every year, leaving only Portugal and Denmark having a worse record.

* people whose chance of seeing a doctor is smaller than almost anywhere else with them seeing one on average only five times a year compared to, for example, 14 in Japan.

* 25 doctors per 10,000 inhabitants which is lower than most of its competitors.

Britain has a health system characterised by the 'high relative income level of health professionals and that efficiency could be improved if contracts were rewritten to give doctors less money'.