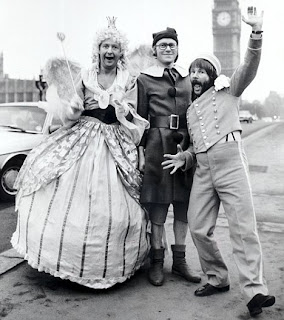 'The Goodies' were a comedy trio consisting of the now, 69 year old Bill Oddie and Tim Brooke-Taylor and 67 year old Graeme ­Garden, whose show ran on BBC TV from 1970 to 1982 and reached 15 million viewers at its peak.


Now, 28 years after the last episode, 'The Daily Mail' newspaper reported that the trio are 'baffled' by the BBC's refusal to re-run the series on the show's 40th Anniversary.
"We are cross," said Tim. "The ­programmes are still regularly aired in Australia and the show is still ­massive, over all ages, so we do know that it still appeals. That’s what’s frustrating. If they showed a few and people said “that’s rubbish”, we’d accept that. It’s the fact that it’s not given the chance."

Readers of the article in the paper emailed the following suggestions :

* The reason 'The Goodies' is rarely talked about is that it was very much of the era and, lets be honest here, not very good. It's dated badly.

* Although all three of them went on to make some really good stuff, 'The Goodies' itself was pretty weak with just the odd witty catchphrase and sketch.

* The Goodies are now only 'peeved' because they need income and some more time in the spotlight. This series was on when I was a kid. It was terrible then and appears outdated now. Please let it stay on the dusty filing shelf BBC, there are far better comedy series from the 1970's you could bring back.

* I'm 25 & I recently saw The Goodies for the first time...and really loved it! I can see why it polarises people, it's definitely a certain brand of humour, but it's imaginative, innovative, cartoonish and very, very silly. I'd be thrilled if the BBC showed a 'Best Of' compilation of all the seasons.

An introduction to the show :
http://www.youtube.com/watch?v=raHNSIWOG4k