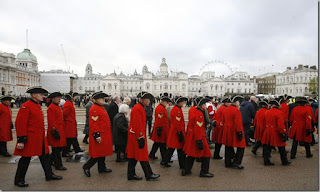 An article in the Guardian newspaper today was entitled :

The Royal Hospital is a retirement and nursing home for former members of the British army. Founded in 1682 by King Charles II, it was set up to provide 'succour and relief of veterans broken by age and war'.

* the thieves who stole more than £6,000 from Chelsea Pensioners may have deliberately targeted their 'Veterans'Club' after Armistice Day on Sunday, after the former soldiers had attended remembrance services to honour their fallen comrades.

* dozens of Pensioners had been joined by relatives and friends at the Club and Major General Peter Currie, the Lieutenant Governor of the Royal Hospital, said that he suspected the intruders knew there would be a large amount of money : "It is terribly sad, coming at the end of Remembrance Weekend and it is not the first time".

A Metropolitan police spokesman said forensic experts had visited the Club in an attempt to identify those responsible.

The old soldiers who have been robbed are :

* former non-commissioned officers and soldiers of the British Army.

* in receipt of an 'Army Service' or 'War Disability Pension'.

* free from the obligation to support a wife, partner or family.

Here, some of them talk about what it is like to be a Chelsea Pensioner on the occasion of their soon to be released songs on DVD :
http://www.youtube.com/watch?v=bi4I42Wxy8M 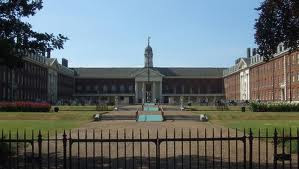