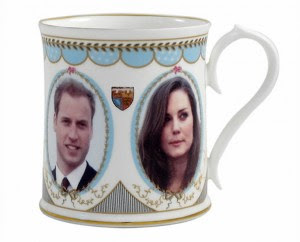 Britain is the only 'major' country in the world where the Government can decree that there shall be a national holiday on the 29th of April 2011, to allow its citizens to 'celebrate' when two people, who have no extraordinary gifts or talents are to get married in one of the most famous churches in the country called Westminster Abbey.

The two people in question are William Windsor, a 'prince', and Kate Middleton a 'middle class' young lady. Here we have one of the greatest of ironies : Britain, a country which sees itself as the bastion of democracy, is also one where the undemocratic, monarchic principle is still alive and well as is reflected in the wedding.

Our democratically elected Prime Minister has said :
“We want to mark the day as one of national celebration, a public holiday will ensure the most people possible will have a chance to celebrate on the day,”

The Prince's Private Secretary, Jamie Lowther-Pinkerton, has revealed a number of interesting details by :

* saying that the couple chose the Abbey for its "staggering beauty, 1,000-year royal history and its feeling of intimacy despite its size".

* revealing that the couple were "calling the shots" on the wedding plans, but had a "rather large supporting cast" to help them.

* observing that : "We know that the world will be watching on April 29, and the couple are very, very keen indeed that the spectacle should be a classic example of what Britain does best."

* revealing that "Prince William and Catherine have made it very clear that they wish everybody to be able to enjoy the day with them. Consequently, the day will be a proper celebration for the nation and the realms."