Britain's old men fear not, you too shall be asked "How happy are you ?" 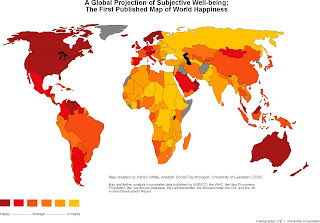 The Guardian Newspaper had a front page article today entitled :

'The UK government is poised to start measuring people's psychological and environmental well being, bidding to be among the first countries to officially monitor happiness'.

'Despite 'nervousness' in Downing Street at the prospect of testing the national mood amid deep cuts and last week's riot in Westminster, the Office of National Statistics will shortly be asked to produce measures to implement David Cameron's long-stated ambition of gauging 'general well being''.

So Britain's old men, ask yourselves what's in it for you ?

* The Prime Minister wants to place the results at 'the heart of future government policy-making'.

* You will be asked about your 'subjective well being', which includes a gauge of your 'happiness' and also a more objective sense of how well you are achieving your 'life goals'.

Hold on, with most of your lives over are you still trying to achieve these goals ? Did you have any in the first place ? If you didn't, is there anything wrong with you ?

* The questions you might be asked are likely to focus on 'evaluation', 'experience' and 'purpose' and could include:

- Overall, how happy did you feel yesterday?

- How much purpose does your life have?

I suspect that many of Britain's old men might be giving that last one a low score.

What response to the proposal did Guardian readers email to the newspaper :

* How much is this nonsense going to cost?

* Hilarious! Make everybody thoroughly miserable and angry by cutting essential services and social support, and then waste money measuring the happiness of a totally demoralised and dejected population.... for what purpose exactly?

* Oh you really couldn't make this up.

* Surely only a matter of time before the headline: Government to cut happiness by 30%

* I would say that the mood is one of teetering on extreme violence.......