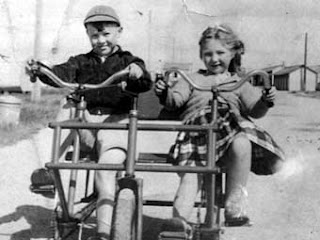 Pontin's falls into administration as fond memories fail to save firm.
• Receivers try to find buyer for rival to Butlin's holiday camps
• £40m owed after string of owners and bad publicity 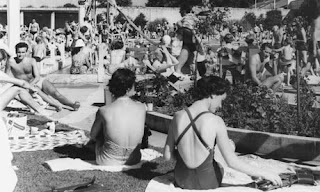 The photo was captioned :

When life was black and white: a Pontin’s holiday camp in the 1950s.


The article made the following points,that the :

* 64-year-old company which gave working class families the chance to get away to the seaside during the 1950's and 1960's had collapsed into administration.

* directors had put the five remaining camps in Somerset, Sussex, Suffolk, Wales, and Merseyside into the hands of accountants after hemorrhaging cash in the economic downturn.

* firm was founded in 1946 by Fred Pontin, an East End boy who left school at 15 and went to work on the Stock Exchange.

* first camp was opened at Brean Sands on a former USA Army base which Fred bought for £23,000, gave the empty wooden huts a lick of paint, advertised in the 'Sunday Express' and had his camp full of holidaymakers.

* camps still had 'bargain breaks' up till last weekend, with one camp offrering 'Girls Just Wanna Have Fun' at £25 a head for two nights, complete with 'chick flicks, beauty and pampering and live entertainment from the fantastic 'Fantasy Boys''.

Sadly, debt-laden Britons have saved rather than spent on holidays and one of the accountants called in to run the business said :
"Pontin's forms the backdrop to thousands of treasured family holiday memories. It has unfortunately struggled in the current economic environment but... we are optimistic that it will be part of thousands of family memories in the years to come."

Somehow, I don't think that this will be the case, particularly when I read that : 'leisure industry experts said that Pontin's had failed to throw off a 'down-at-heel image' to keep up with its rival, Butlin's, which has transformed many of its camps to more upmarket holiday centres'.

'Hi-de-Hi!' was a tv sitcom which ran on the BBC in the 1980s and was set in a '50's holiday camp written by Jimmy Perry and David Croft and was inspired was the experience of Perry who was a 'Redcoat' at a Butlins holiday camp.