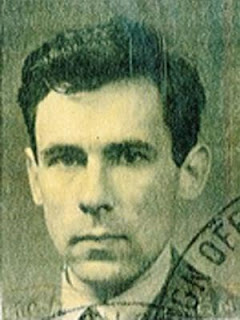 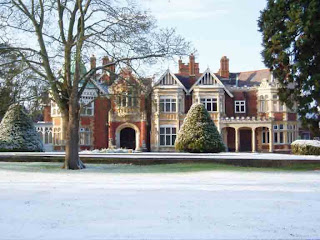 John Herivel, who has died at the age of 92, is described by 'The Guardian' as :
One of Bletchley Park's most brilliant Wartime codebreakers.

I had heard of the Second World War 'Bletchley Park' code breakers,however, I didn't know that :

* the 'Park', in Bletchley, Buckinghamshire, also known as 'Station X' was the site of Britain's main enemy 'code decryption centre' where the codes of the German 'Enigma' and 'Lorenz' machines were broken.

* the high-level intelligence produced there provided crucial assistance to the Allied War Effort which shortened the War by not less than two years.

* to cover their real purpose, the first Government visitors described themselves as 'Captain Ridley's shooting party'.

* the estate was near the railway station and the 'Varsity Line' between Oxford and Cambridge Universities, which supplied many of the code-breakers.

* intelligence produced from decrypts contributed greatly to Allied success in defeating the U-boats in the 'Battle of the Atlantic' and to the naval victories in the Battles of 'Cape Matapan' and 'North Cape'.

* in 1941, Bletchley intelligence had a powerful effect on the North African desert campaign, where the German army was led by Rommel and about which General Auchinleck said that, without it "Rommel would have certainly got through to Cairo".

* other intelligence meant that before the 'D-Day Landings' in 1944, the Allies knew the locations of all but two of the 58 German divisions on the Western front.

* during the War, Churchill shared intelligence with the Americans but not the Russians and after the war, he referred to the Bletchley staff as "My geese that laid the golden eggs and never cackled".

* 9,000 people were working at Bletchley Park at the height of the codebreaking efforts in 1945, of whom more than 80% were women.

* One of the greatest successes of the Park was to break the 'Enigma' cipher they called 'the Red' in 1940 using a method devised in a moment of brilliant insight by John Herivel who :

* exploited German over-confidence in the unbreakable nature of the Enigma machine and the laziness of the operators using it.

* had been studying mathematics at Cambridge when recruited to 'Hut 6', which dealt with German Army and Luftwaffe Enigma ciphers.

* later said that he was "very young and very confident and I said 'I'm going to find some way to break into 'The Red'. Every evening, when I went back to my digs and when I'd had my supper, I would sit down in front of the fire and put my feet up and think of some method of breaking into 'the Red'. Then one evening, I remember vividly suddenly finding myself thinking about the other end of the story, the German operators, what they were doing and inevitably then I thought of them starting off the day."

The Enigma machine looked like a typewriter set in a box which used a series of 3 rotors to encipher each letter. The operator typed in the message and the depression of each key sent an electrical impulse through the rotors, moving one on by one position and the enciphered letter lit up on a lamp board.

At the start of the day, the operator inserted the allocated rotors according to a set plan and was then supposed to move the rotors randomly, selecting a new position for the rotors and sending it as a three-letter indicator at the start of his first message.

Herivel takes up the story :

* "Then I had the thought. Suppose the operator was a lazy fellow and he were to leave the wheels untouched in the machine and bang the top down and look at the windows, see what letters were showing and just use them.

* If a number of operators were doing the same thing, or only moving the rotors a few notches, then the indicators would all cluster together around the actual settings, reducing the possibilities for each letter from 17,576 to around 20."