Britain is a country where old men, who were once boys in London on this day 70 years ago, 7th September 1940, remember the start of 'The Blitz' 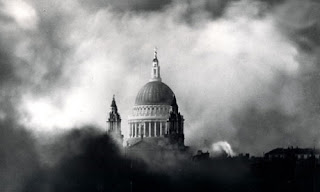 Because I was born 2 years after the end of the greatest conflict in human history called 'The Second World War', I have to remember that there are many old men and women alive who have very sharp memories of a wartime experience when they were kids.

Today, the day which marks the start of the bombing of London, is one of those days which makes me sit up and remember that :

* this happened on that day :

* late in the afternoon German bombers came, flying low, in formation, up the Thames, to start eight months of bombing the capital.

Of those who were there :

* Colin Perry : "It was the most amazing, impressive, riveting sight. Directly above me were literally hundreds of planes,the sky was full of them. Bombers hemmed in with fighters, like bees around their queen, like destroyers round the battleship, so came Jerry."

* Mavis Fabling : "I can still remember it very vividly. My mother was baking in the kitchen, I was playing outside and my father was digging in the garden. Suddenly he rushed inside. He'd seen the planes overhead. "Quick, quick, quick, get into the air raid shelter". There were awfully frightening sounds, of bombs dropping and then there was one ghastly, thunderous sound. It was a direct hit on our neighbour's shelter. They were all killed, the whole family, except the father who was out. I can remember looking out of the window at the coffins being brought out and my mother very distressed. Then my father got the car from his work and took us down to my Grandfather's house in Kent and I can remember looking back out of the window and seeing the sky glowing red behind us."

* although there had been scattered, small-scale raids for weeks, this was the first concerted attack, ordered two days before by Hitler in retaliation for an RAF raid on Berlin a fortnight earlier.

* communities beside the docks got it worst: Silvertown was cut off for hours, its roads and terraces ablaze and Deptford too. This was where my brother lived with Mum and Dad, he was 10 months old at the time.

* the fire brigade was nearly overwhelmed.

* at 8.30pm, a second wave of bombers arrived, using the fires to guide them up the river.

* the air raids continued for for 57 consecutive nights between mid-September and mid-November and then regularly for another six months until May 1941.

"Somehow, we just carried on," said Mavis Fabling. "I think it was worse for our parents than for us. I got used to doing my homework in the shelter. The teachers still expected you to learn your Shakespeare sonnet for the morning." 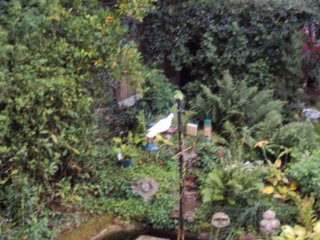 P.S. I have just photographed this white dove, the dove of peace, feeding from the bird dish in the garden. It reminds me that my wife was born in Hamburg 2 years after the end of the War and that her parents too had experienced the horror of our 'Blitz' on their city.

Labels: The start of the London Blitz