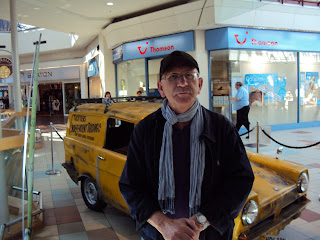 'Only Fools and Horses' was a British television sitcom, created and written by John Sullivan and the title comes from the experssion 'only fools and horses work'. Seven series were originally broadcast on the BBC between 1981 and 1991, between my ages of 34 and 44.
It was set in Peckham in South London not far from where I grew up as a boy and starred David Jason as ambitious market trader Derek or 'Del Boy' Trotter. The series chronicled their highs and lows in life and, in particular, their attempts to get rich.

It still holds the record for the highest UK audience for a sitcom episode when it atrtacted 24.3 million viewers.

It also had an impact on British culture, contributing several words and phrases to the English language and helping to popularise the 'Reliant Regal' van.
My local supermarket had a classic ar show at the weekend and the little van was on show.

These 3 scenes give a flavour of the comedy :

Stick a pony* in my pocket,
Fetch the suitcase from the van.
Cos if you want the best-uns,
But you don't ask questions;
Then brother, I'm your man!

Cos where it all comes from is a mystery,
It's like the changing of the seasons,
Or the tides of the sea.
But here's the one that's driving me beserk,
Why do only fools and horses work?

No income tax,
No VAT,
No money back,
No guarantee.
Black or white,
Rich or poor,
We'll cut prices and a straw!

Labels: Only Fools and Horses