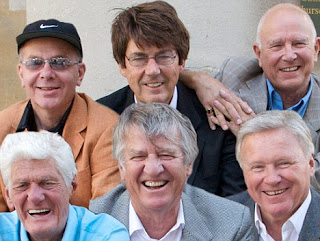 Pete Murray the erstwhile disc jockey is 85 today. He is bottom left im this photo alongside other old d.j's. I shall always associate him with the 1960's and have discovered that he :

* was born in London where he attended the famous independent school,St Pauls.

* joined Radio Luxembourg in 1949 or 1950, remained there until 1956 and was one of the first people in the world to use the 'F' word 'on air', after a technician put the wrong record on the turntable.

* back in London, presented popular music on the BBC 'Light Programme' and hosted one of BBC Television's earliest pop music programmes, the skiffle-based 'Six-Five Special' in the late 50's.

* was among the first regular presenters of 'Top of the Pops' when it began in 1964.

* was also an actor who attended the Royal Academy of Dramatic Art and is a RADA Gold Medallist. On the London stage he starred in the musical 'Scapa!' in 1962.

* once broke down on live television after his son committed suicide at age 27 and afterwards he gave talks on coping with family tragedy.

* courted controversy in 1983 when he appeared as a guest newspaper reviewer on the BBC TV's 'Breakfast Time' and encouraged viewers to "Vote Conservative" at the upcoming election claiming that "a vote for Labour would be a vote for communism, and may God have mercy on your soul". At the end of that year the BBC controversially cancelled his radio shows, describing his style of broadcasting as 'too old-fashioned'.