Britain is no country for old men like Pastor Terry Jones, who want to burn books, not yet anyway...

The intention of Pastor Jones, leader of a tiny Protestant church in Gainesville, Florida, to publicly burn copies of Islam's Holy Book,'The Koran' has made world headlines.
He has faced calls from the U.S. Government, military and religious leaders and from abroad and he remains defiant and said : "We are not convinced that backing down is the right thing. A burning of the Koran is to call attention that something is wrong. We need to stand up and confront terrorism." 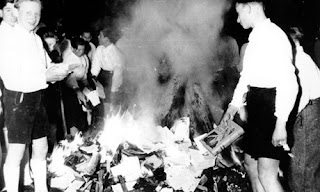 An article in the Guardian newspaper entitled :
Book-burning: fanning the flames of hatred Pastor Terry Jones's plan to burn 200 copies of the Qur'an in Florida was widely condemned. But the unique symbolism of book-burning has a long and sinister history.
made the following points :

* on the night of 10 May 1933, 40,000 people gathered in the 'Opernplatz' in Berlin and amid joyous singing, band-playing and chanting of oaths and incantations, watched soldiers, police from the SS, members of the paramilitary SA and youths from the 'German Student Association' and 'Hitler Youth Movement' burn 25,000 books decreed to be 'un-German'.

* Propaganda Minister Goebbels said : "You do well, in this midnight hour, to commit to the flames the evil spirit of the past, from this wreckage the phoenix of a new spirit will triumphantly rise."

* the German poet, Heinrich Heine had his books burned and wrote a play in 1821 in which he said :
'Dort, wo man Bücher verbrennt, verbrennt man am Ende auch Menschen'.
'Where they burn books, they will, in the end, also burn people'.

* the English poet, philosopher and political theorist John Milton, whose books were publicly burned in England and France, wrote in 1644 :
'Books are not absolutely dead things, but do contain a potency of life in them to be as active as that soul was whose progeny they are. Anyone who kills a man, kills a reasonable creature, God's image, but he who destroys a good book kills reason itself.'
* in Ray Bradbury's book 'Fahrenheit 451', book-burning had become institutionalised in a anti-intellectual USA.

* in George Orwell's 'Nineteen Eighty-Four', unapproved books and tracts were consumed by flames in a 'memory hole'.

* in China in 213BC the Emperor Qin Shi Huang's ordered that all books of philosophy and history from anywhere other than Qin province be burned and a large number of uncooperative intellectuals be buried alive.

* Popes from the 13th to the 17th centuries ordered the burning of the 'Talmud' and Tyndale's English New Testament in the 16th.

* the Spanish Inquisition burned 5,000 Arabic manuscripts in Granada in 1499 and Spanish conquistadors burned all the sacred texts of the Maya in South Americaq in 1562.

* communists burned 'decadent' western books in the Soviet Union in the 1920s.

* Orthodox Jews in Jerusalem burned copies of the New Testament in 1984.

* Salman Rushdie's 'The Satanic Verses' was burned in Bolton and Bradford in the U.K. in 1988.

* Harry Potter books have been burned in the USA and in Rome the 'Da Vinci Code' was consigned to the flames.

* in history, whole libraries have been razed to the ground : Alexandria in Egypt and Washington by the British, Louvain, by the Germans.

* Andrew Motion, former Poet Laureate said :
"Book-burning, is first and foremost a monumental manifestation of intolerance. It's the conflation of what ought to be nuanced views into one, hate-filled act."

* Anyone who had tried to burn Hitler's 'Mein Kampf' in Germany in 1933, would have been arrested and shot.

P.S. I have seen the memorial which marks the spot of the book burning in Berlin. A thick sheet of glass in the pavement allows you to look down into a room with empty book shelves. I found it both moving and thought provoking.