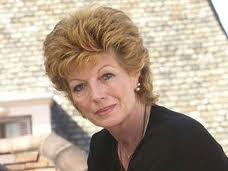 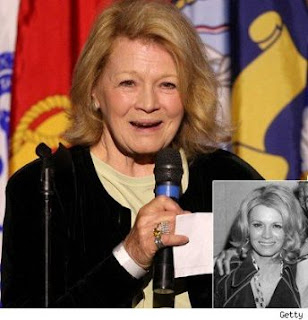 Of these 2 beautiful thespians, Rula Lenska is 63 today and on the other side of 'The Pond', Angie Dickinson is 79.

Things you probably didn't know about Rula, that she :

* was born as 'Roza-Marie Leopoldyna Lubienska' in St Neots, whose father, Major Count Ludwik Maria Lubienski, had led 'Radio Free Europe' in Poland and was the chief of the Polish military mission in Gibraltar during World War II. Her mother was the former Countess Elzbieta Tyszkiewicz.

* renounced her title as a Polish countess saying : "In England it doesn't count, if you'll excuse the pun."

* in the late 70's and early 80's, became famous in the USA and Canada for her 'Alberto VO5' hair products commercials which began with a closeup of her stating, "I'm Rula Lenska." People assumed this was a product endorsement by a celebrity whose name they were expected them to know, it was a marketing ploy which worked and so she became famous for pretending to be famous.
http://www.youtube.com/watch?v=5-SJoIpTPk8

* is a blood donor and an ardent conservationist who has travelled widely raising awareness about the world's dwindling wildlife.

Rula with Terry in 'Minder' :
http://www.youtube.com/watch?v=C5GtUzm6x-M

Things you probably didn't know about Angie Dickinson, that she :

* has appeared in more than 50 films, including 'Rio Bravo', 'Ocean's 11', 'Dressed to Kill' and 'Pay It Forward' and starred on tv as 'Sergeant Suzanne Pepper Anderson' in the 1970's crime series 'Police Woman'.

* was born in Kulm, North Dakota, the daughter of Frederica and Leo H. Brown in a family of German descent and was raised as a Roman Catholic.

* graduated from 'Immaculate Heart College' with a degree in business.

* took a cue from her publisher father and intended to be a writer.

* after her first marriage to Gene Dickinson, decided to pursue a career in acting and a few years later was approached by NBC to guest-star on a number of variety shows.

* met Frank Sinatra who became a lifelong friend and she would later play his wife in 'Ocean's Eleven'.

Here she is with Michael Caine in 'Dressed to Kill' in 1980 :
http://www.youtube.com/watch?v=VxG57Uf7iMU


If you want to know more about Angie, check her out on Wikepedia :
http://en.wikipedia.org/wiki/Angie_Dickinson