Britain is more and more a country for 'Victor Meldrows' 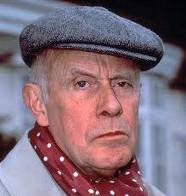 Victor Meldrew was a fictional character in the popular BBC One sitcom 'One Foot in the Grave' which ran from 1990 to 2000. He was created by David Renwick and played by Richard Wilson, the archetypal grumpy old man.

In the series Victor :


* had been forced to take involuntary early retirement,

* tried to keep himself busy, whilst encountering various misfortunes and misunderstandings.

* lived with his wife in a suburb of London based on Luton.

* became, for many who watched the series, a mouthpiece for the very things that always got on their nerves like : children, cars, animals, power cuts and the neighbour next door.

* developed the catch phrase, "I don't believe it!" as an expression of discontent which was used since he would often stop short at "I don't...." because David Renwick wanted to avoid the phrase becoming overused.

* was 'ironically' given the name 'Victor', since he almost always ends up as the loser.

In Britain the term 'Victor Meldrew' became shorthand for a constantly bitter and complaining elderly man. However, Richard himself once said in an interview that he was a "normal man in a world full of idiots". Many people found themselves sympathising with him, rather than laughing at him as he became embroiled in complex misunderstandings, bureaucratic vanity and, at times, sheer bad luck.

In the final episode, 'Things Aren't Simple Any More',Victor was killed after being hit by a car and, despite the incident being fictional, passers-by left bouquets of flowers at the railway bridge in Shawford, a small village in Hampshire, the location where it had been filmed.

Here's a short clip of Victor 'calling' for his.....
http://www.bbc.co.uk/comedy/clips/p008twbx/one_foot_in_the_grave_i_dont_believe_it/