Battle of Britain pilots, the last of 'The Few', what do you think of the Britain you fought for now ? 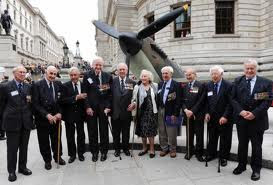 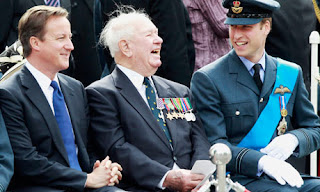 What kind of country is Britain 70 years on from 'The Battle of Britain' ?
What do the surviving old, brave men make of the country they fought for and their fellow airmen died for, think of Britain today ?

Some facts about their country :

* After polling more than 3,500 people, the 'Joseph Rowntree Foundation' concluded that Britain's 10 evils were :

Those questioned blamed big business, religion and the media.
'People are concerned about the way our society has become more individualistic, greedy and selfish, seemingly at a cost to our sense of community. The focus on greed as an issue reflects concern about the growing gulf between the rich and poor. Connected to all of these issues was the perception that we no longer share a set of common values and that we have lost our 'moral compass.' '

Seventy years on, the heroes who repelled Hitler’s Luftwaffe during the 'Battle of Britain', arguably the most important ever fought by the nation, are a dwindling band. It is thought that only 79 are still alive.
At the start of the Battle Prime Minister Churchill said :
http://www.youtube.com/watch?v=4lXsbn5LCzQ

Many were in their late teens or early 20's when they took to the skies in Spitfires and Hurricanes from July to October 1940. Others flew in Blenheims, Beaufighters and Defiants. Some became the ‘aces’ of the Battle, shooting down plane after plane.

During the Battle, Sir Winston Churchill said: "The gratitude of every home in our Island, in our Empire, and indeed throughout the world, goes out to the British airmen who, undaunted by odds, unwearied in their constant challenge and mortal danger, are turning the tide of the World war by their prowess and by their devotion.
Never in the field of human conflict was so much owed, by so many, to so few."
http://www.youtube.com/watch?v=SX700vsKasA

When it was over, 544 RAF pilots and aircrew were dead. 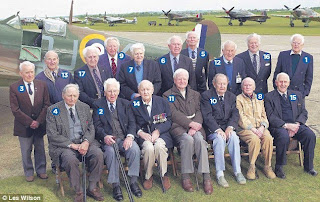 * Flight Lieutenant Owen Burns. Age 95.
A gunner in a Blenheim in 235 Squadron, Coastal Command.
2 below.

* Flight Lieutenant Terry Clark. Age 91.
An air-gunner with 76 Squadron,
3 below.

* Flight Lieutenant Trevor Gray. Age 95.
Became friends with a German pilot whose Messerschmitt 110 he shot down in a dogfight with his Spitfire.
7 below.

* Flight Lieutenant Bill Green. Age 92.
Found himself outnumbered 16 to one while circling over Kent with 501 Squadron.
8 below.

* Wing Commander Terence Kane. Age 91.
A member of 234 Squadron, he recalls abandoning his Spitfire over the Channel after a dogfight in which he, aged 19, shot down a German plane.
10 below.

* Wing Cmdr Tom ‘Ginger’ Neil. Age 90.
One of the pilots the War Ministry used in propaganda because of his height and good looks.
11 below.

* Squadron Leader Tony Pickering. Age 90.
Shot down by a German fighter plane, he recalls being forced to bale out of his blazing Hurricane at 3,000ft.
12 below.

* Squadron Leader Michael Wainwright. Age 90.
Destroyed a Messerschmitt fighter off the South Coast in July 1940.
14 below.

1. "Some Messerschmitt came out of the sun above us. I was the 'tail-end Charlie' at the back of our patrol and the first thing I knew was that the starboard wing had disappeared. I opened the canopy and was blown out and landed in a field near Maldon in Essex. My shoes were a mess, which made me annoyed because I had bought them only the day before."

2 Distinctly recalls the silk underwear he wore to protect him from the bitter cold and feeling vul?nerable. "You’re on your own, completely. All you’re concentrating on is getting back to Earth again and when you got out of the aircraft and saw the holes, sometimes you’d been riddled with bullets. We were all very young, it was a totally different world we were living in."

3. Has an abiding memory is of bitter nights spent on cold floors waiting for the order to 'scramble'. "All we had was a small blanket to keep us warm, but they used to keep us going with 6in-thick sandwiches as we whiled away the time playing cards."

4. Brought his Hurricane down in a field after a bullet hit his engine. "As I pulled myself out of the plane I saw a man running towards me, waving a pitchfork and shouting, “I am going to kill you, you bloody German!” He was chasing me around the plane. Fortunately four British soldiers arrived and disarmed him."

5. An air-gunner and wireless operator with 248 Squadron, he flew Bristol Blenheims.

6. "Sitting around waiting was always the worst part of the thing. Waiting for the bell to ring to tell you to take off."

7. "I took the German pilot out to dinner with his wife and my late wife, Dorothy. We swapped Christmas cards every year until he died three years ago."

8. "Suddenly there was a crash of glass, a big hole in the windscreen. I started getting covered in engine-coolant liquid and I realised my aircraft was crippled". He baled out, but initially his parachute failed. He recalls: "Quite magically, there was a jolt. The wind must have got under the folds of the parachute. I couldn’t believe that I was alive."

9. "As far as we were concerned, we saved the world," he says. Facing enemy fire he plunged 18,000ft and ditched his plane into the sea near the Suffolk coast.

10. "My engine stopped and I deci?ded the only thing was to bale out." He couldn’t release his oxygen mask and had to climb back into the aircraft to free himself. "I reached for the parachute ripcord and couldn’t find it. Panic set in. I was falling through cloud . . . if I’d been three seconds later pulling the ripcord, I wouldn’t be here. The Germans fished me out and I spent the rest of the war as a Prisoner of War.’

11. A 'Hurricane Ace', he flew 141 combat missions, (few pilots reached 50), shot down 13 enemy aircraft and was still only 19 when the Battle of Britain ended. " I should have been killed a dozen times."

12. "We were very young. I don’t think we realised fully what we were doing. We were enthusiastic and we were driven on by Winston Churchill."

13. "We were very new and raw. On my third day with the squadron I had my first engagement, when Germans were spotted coming in. I’d never seen a German aircraft before, not one, and here were 100 or so. I got my baptism of fire then, I really did."

14. Two months pre?viously, the 20-year-old member of 64 Squadron had claimed another 109, this time over Dunkirk during the Battle of France. In his wartime logbook he wrote: ‘I never made serious friendships with other pilots. I didn’t want to be friends with somebody who got killed."

15. Two months later his Spitfire was shot down over Dover by one of Germany’s most famous air aces, Werner Mölders. "In the sea I tried to sit on some floating wreckage but kept slipping into the water. A fishing boat picked me up." By the time they reached Ramsgate, he was suffering from hypothermia. "I was carried up the steps of the harbour and a crowd all cheered and a dear old woman handed me a pack of cigarettes."

16. "The Battle of Britain made me want to put a value on life. I decided that if I survived, I wanted to be allowed to relish it. Now I have a life of deep tranquillity."