Britain was once a country for Jonathan Routh and 'Candid Camera' 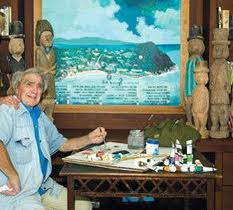 My posting about Pete Murray and his role in the radio version of 'Candid Camera' took me back to the 1960's, the TV version and a very strange and funny man called Jonathan Routh. Almost 50 years later, I can see that many 'modern' British comics have their antecedents in him.

What I didn't know about Jonathan, that he :

* published a number of humorous books, and also painted for many years and his paintings of nuns and Queen Victoria were turned into a number of books.

* was the son of a British Army colonel and spent much of his early childhood in Palestine.

* was educated at Uppingham School, and Emmanuel College, Cambridge where he read history.

- 'The Good Loo Guide' and 'The Good Cuppa Guide' about London.
- 'The Guide Porcelain to the Loos of Paris.'
- 'The Better John Guide' about New York.

His humour owed much to his 'apparent' seriousness and his affectionate parody of the connoisseurship of 'The Good Food Guide.'

I don't know the books, however I do remember episodes from 'Candid Camera' and in the reactions to him among the unsuspecting members of the public, I see those traits which made and still make for most of the population Britain today :

I think his talents and these traits can been seen in these clips :

Here he is on the radio on 'Candid Mike' which predated 'Candid Camera' :
In the tailor's shop and the taxi driver and the recipe :
http://www.youtube.com/watch?v=tzZM_5XdcBo

All these years later the clips still make me laugh.

His obituary in the 'Independent' :
http://www.independent.co.uk/news/obituaries/jonathan-routh-prankster-star-of-candid-camera-who-later-became-a-painter-and-the-author-of-the-good-loo-guide-842128.html