Britain is a country for a blind, old, 'blind dog' called 'Edward' his old master 'Graham' and their young guide bitch called 'Opal' 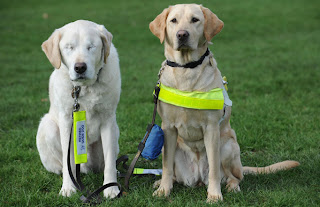 The 'Daily Mail' carried a story today entitled :
Blind man keeps his old guide dog after it loses its sight... and then gets a new one who now leads them both around

It involved 60 year old Graham Waspe, who was devastated when, after 6 years, his guide dog 'Edward' became blind after developing cataracts and then experienced joy when his replacement, 'Opal', turned out to be a real gem.
Opal is not just helping Graham, who has limited vision in only one of his eyes, to carry out everyday tasks, but also helping Edward to get around.

Graham from Suffolk, got Opal after Edward developed the inoperable problem which resulted in him needing both eyes removed and she has stepped in where Edward left off as they tour their old haunts together.

Now the two dogs have attracted a large number of admirers during their tours of schools and community groups in Suffolk to raise awareness.
As well as carrying out visits to raise awareness of the 'Guide Dogs Charity', Graham and his wife also do fundraising and run a local group. Their latest collection outside a Stowmarket supermarket raised an impressive £1,601.83.. 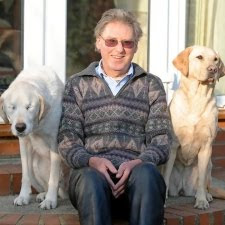