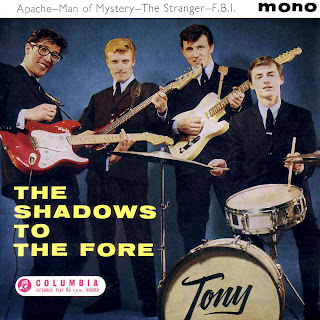 What I didn't know about Jet, that he :

* grew up in North London, where at school, his speed at running earned him the nickname 'Jet'.

* learned to play clarinet and made his own 4 string double bass guitar to play in a jazz group.

* in 1958, while playing with drummer Tony Crombie and his group 'The Rockets', got a 'Framus bass guitar' which made him one of its first British exponents.

* played in 'The Vipers Skiffle Group' and 'The Most Brothers' before joining, in 1959, Cliff Richard's backing group, 'The Drifters', who later changed their name to 'The Shadows' at his suggestion.

* after his 'Framus' was damaged in a dressing room accident, was presented by the importers with a 'Fender Precision Bass', one of the first to come to Britain from the USA.

* left 'The Shadows' in 1962, following disagreements and released solo instrumental and vocal work as part of a duo with former 'Shadows' drummer Tony Meehan.

* produced with Tony in 1963 the hit 'Diamonds' and followed this with two more : 'Scarlett O'Hara' and 'Applejack'.
Diamonds :
http://www.youtube.com/watch?v=KAUOnTaa_TE

* ended his partnership with Tony in 1963, attempted a solo comeback in 1966, was briefly in the line-up of the 'Jeff Beck Group' in 1967 and then worked as a labourer, bricklayer, porter in a hospital, bus conductor and as a seller of cockles on the beach in Jersey.

* after 30 years of heavy drinking, finally admitted to being an alcoholic, sought help and made a point in his stage shows of saying how long it had been since he quit drinking, winning applause from audiences who knew how it had wrecked his career in the 60's.

* in 1998, was awarded a 'Fender Lifetime Achievement Award' for his role in popularising the bass guitar in Britain.