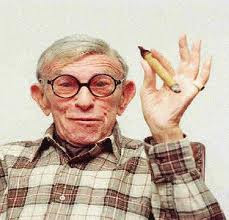 * At my age flowers scare me.

* You know you're getting old when you stoop to tie your shoelaces and wonder what else you could do while you're down there.

* I look to the future because that's where I'm going to spend the rest of my life.

* If you ask what is the single most important key to longevity, I would have to say it is avoiding worry, stress and tension and if you didn't ask me, I'd still have to say it.

* If you live to be one hundred, you've got it made. Very few people die past that age.

* You can't help getting older, but you don't have to get old.

* How beautifully leaves grow old. How full of light and color are their last days.

His song, 'I wish I was eighteen again', is full of nostalgia for youth :

At a bar down in Dallas an old man chimed in,
And I thought he was out of his his head.
Just being a young man, I just laughed it off,
When I heard what that old man had said.

He said, I'll never again turn the young ladies heads,
Or go running off into the wind.
I'm three quarters home from the start to the end,
And I wish I was eighteen again.

Now time turns the pages and oh, life goes so fast,
The years turn the black hair all grey.
I talked to some young folks, hey they don't understand,
The words this old man's got to say.

Lord, I wish I was eighteen again!

I first saw George on black and white t.v. in the 1950's in the 'Burns and Allen Show' in which he played with his wife, but it is only now, all these year later, that I begin to appreciate this man of wit, charm and equanimity who said :

" Age means nothing. I can't get old ; I'm working. I was old when I was 21 and out of work. As long as you're working you stay young. When I'm in front of an audience, all that love and vitality sweeps over me and I forget my age."

Things I didn't know about George's life before he reached the age of 18, that he :

* was born Nathan Birnbaum, the ninth of 12 children in New York City where his father was a 'substitute cantor' at the local synagogue who died from influenza in the epidemic of 1903.

* practiced singing harmony with the other kids in the basement and then, calling themselves the 'Pee-Wee Quartet', started singing on ferryboats, in saloons and brothels and on street corners.