Britain says "Goodbye" to an old thespian called Michael Gough, aka Batman's butler, 'Alfred Pennyworth' and so much more 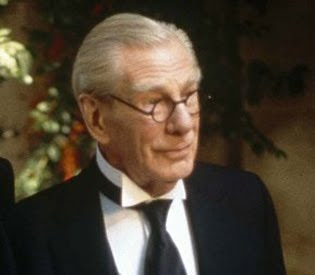 Michael, a classically trained actor, with poise and presence, who appeared on stage and in 150 films over 65 years and is best known as 'Alfred' the Butler in 'Batman' films, has died at the age of 94.

Things you probably didn't know about Michael, that he :

* was born in Malaya, where his father was a rubber planter and in England went to school in Kent and then dropped out of Agricultural College in order to study acting at the Old Vic in London.

* was a conscientious objector during The Second World War and served in the Non-Combatant Corps.

* got his career on stage off to a flying start in the West End, in 'But for the Grace of God' in which he did the 'fist fight-to-the-death scene' with such verisimilitude that nearly all the stage furniture was demolished nightly and broke 3 ribs and injured his spine.

* went on to play in Sartre's 'Crime Passionel' and Daphne du Maurier's 'September Tide' in 1948 and Laertes to Alec Guinness's 'Hamlet' in 1951.

* made his cinematic mark as 'Nicholai' to Vivien Leigh's 'Anna Karenina' in 1948 and opposite Alec Guinness in 'The Man in the White Suit' in 1951 :
http://www.youtube.com/watch?v=m-AwVFmMSaU

* in Ibsen's 'The Wild Duck' in 1955, played the sardonic idealist Gregers Werle, according to the critic, Kenneth Tynan, with 'oozing sincerity while letting the man's neuroses seep through the facade' and was noted by Caryl Brahms for his 'extraordinary capacity for keeping speech straining at the leash, pent-up emotion and the cut and parry and flash of word-play'.

* played the father of a headstrong Julie Christie in the 1970 film, 'The Go-Between' and developed a strong line in science-fiction and horror roles.
The Horrors of the Black Museum :
http://www.youtube.com/watch?v=mMOCNfT-8Jw

* at the National Theatre, excelled as a comedian playing in Ayckbourn's 'Bedroom Farce' in 1977, nibbling pilchards on toast in bed with his wife, Joan Hickson, in celebration of a wedding anniversary.

* as Baron von Epp in Osborne's 'A Patriot for Me'in 1983, presided over a military 'drag' ball in the heyday of the Austro-Hungarian Empire, wore a long gown and tiara, carried a fan and handbag and as 'Queen Alexandra' moved among his guests with the gravity and grace to bring the house down.

* excelled in character roles in film playing for Ken Russell, in 'Women in Love' in 1969, Derek Jarman in 'Caravaggio' in 1986 and Tim Burton, in 'Batman' in 1989.
As Alfred Pennyworth in Batman :
http://www.youtube.com/watch?v=RM-xSc7jp5s