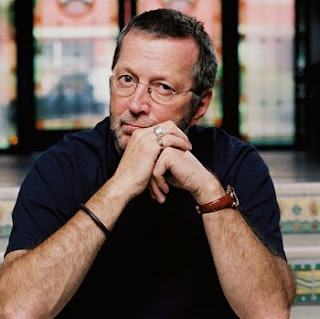 Eric Clapton, ranked 4th in 'Rolling Stone' magazine's list of the '100 Greatest Guitarists of All Time', also vocalist and songwriter, is 66 today.

Things you possible didn't know about Eric, that he :

* was born in Surrey, the son of 16 year old Patricia Clapton and a 24-year-Canadian soldier who was shipped off to War prior to Eric's birth and then returned to Canada.

* grew up with his Grandmother and her second husband, believing they were his parents and that his mother was his older sister.

* received an acoustic 'Hoyer' guitar, for his 13th birthday and influenced by 'The Blues' practiced long hours to learn chords, preserving his practice sessions on a reel-to-reel tape recorder and then listening to them over and over until he felt he'd got it right.

* left school in 1961, studied at the Kingston College of Art but was dismissed because his focus was on 'music' rather than 'art'.

* in 1962, started performing with fellow blues enthusiast, David Brock, in the pubs around Surrey and at 17, joined his first band, an early British R&B group, 'The Roosters'. 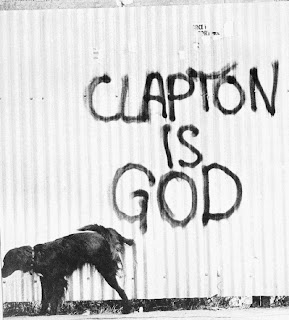 * joined 'John Mayall & the Bluesbreakers', and established his name as the best blues guitarist on the club circuit and inspired a well-publicised graffito by an admirer on a wall the Islington Underground Station : 'Clapton is God'.

* left the Bluesbreakers in 1966 and formed 'Cream', with Jack Bruce on bass and Ginger Baker on drums, began to develop as a singer, songwriter but only spent a short time in the group because of tensions between the members led to its demise.
Sunshine of Your Love :
http://www.youtube.com/watch?v=fqm0GYlUkR0

* set up 'Blind Faith' in i969 with Ginger Baker and Steve Winwood from 'Traffic' and Ric Grech from 'Family', created one LP and and dissolved dissolved after less than seven months.

* with the intention of counteracting the 'star cult faction' which had started to form around him, called 'Eric Clapton and Friends' and then 'Derek and the Dominos'.

* had a close friendship with George Harrison and his infatuation with his wife, Pattie Boyd, inspired 'Layla' from the story from Persian literature, Nezami Ganjavi's 'The Story of Layla and Majnun', the tale of a young man who fell hopelessly in love with a beautiful, unavailable woman and who went crazy because he could not marry her.
Layla :
http://www.youtube.com/watch?v=fX5USg8_1gA