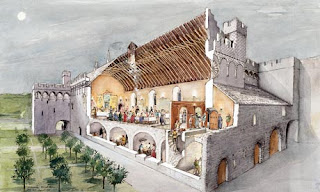 Terry Ball, the historical reconstruction artist, whose drawings grace many historic sites and guidebooks, has died at the age of 79.

Things most people didn't know about Terry , that he :

* was born in Greenwich, London, in a family which had deep Irish roots of which he was proud.

* during, the Second World War, was evacuated to North Wales and after the War, started his studies at the Royal College of Art and spent hours drawing buildings and architectural features.

* in 1957, went to Jericho, joined the archaeologist, Kathleen Kenyon, drew finds recovered from her excavations and fell in love with Palestine and its people, spending long stretches of time there over the next 10 years.

* during the restoration of the Church of the Holy Sepulchre in Jerusalem, grasped the value of 'reconstruction drawings' with one of his earliest works showing the church as it was in the 1040s, drawn during the 'Six-Day War' in 1967,

* returned to London, took a job with the 'Ministry of Public Buildings and Works', in the Ancient Monuments drawing office, eventually ran the office as part of the body which was transformed into English Heritage in 1983.

* honed his skills with drawings of the Guildhall in London, the Tower of London and Windsor Castle. 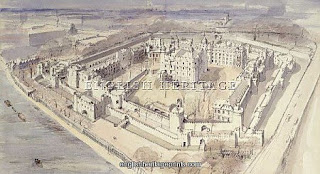 * through the 1980s, painted castles, palaces, abbeys and prehistoric monuments.

* Collaborated with colleagues in the Inspectorate of Ancient Monuments and was able to show, for example, how Richmond Castle might have looked in 1400 and Rievaulx Abbey in 1530. 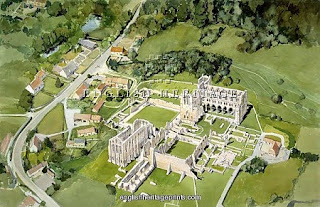 * lives on because, for the many thousands of people visiting ruined medieval castles and monasteries each year, his drawings reveal the former glories of the architecture and throw light on the vanished ways of life within their ancient walls. 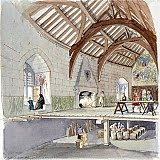