Britain is a country with a t.v. series about two 'Old Guys' and Jane Asher 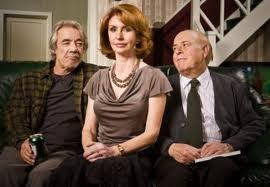 'The Old Guys' is a British comedy tv series which started in 2009 and revolves around two ageing house-mates, Tom and Roy, who live across the street from Sally played by Jane Asher, who they both find attractive.

Tom moved in with Roy after Roy's wife and Tom has little in life but his daughter Amber. Roy is a suburban pensioner who believes that he is one of the country's leading intellectuals and the show examines the relationship between two ageing men.

The series received mixed reviews. 'On The Box', for example, stated : 'Aside from sporting the worst theme tune to accompany a sitcom in living memory, 'The Old Guys' is a horrid confection of cheap BBC comedy and an ill-conceived, poorly handled premise.'

Things I did and didn't know about Jane Asher, that :

* is 65 years old in April and was born in North West London, where her father was a doctor consultant in blood and mental diseases and a broadcaster and author.

* her mother was a 'Professor of Oboe' at the 'Guildhall School of Music and Drama' who taught George Martin to play and Paul McCartney to play the recorder.

* her elder brother,Peter is record producer and was one half of the duo 'Peter & Gordon.'
Here he is in 1964 :
http://www.youtube.com/watch?v=v_lJPUKTchI

* made her first appearance as a child actress in the 1952 film 'Mandy' and later, at the age of 16, played in 'The Greengage Summer'.

* in 1963, interviewed 'The Beatles' and subsequently started a 5 year relationship with Paul McCartney, becoming engaged in 1967.

* stayed with Paul in her family home from 1964–66 where he wrote several Beatles songs and apparently enjoyed the intellectual stimulation of upper-middle class conversation and company which the house afforded.
http://www.youtube.com/watch?v=nxag1BW6qJ0&feature=related

* ended her relationship with Paul in 1968 and has refused publicly to discuss it to this day and remains the only major Beatles associate not to have published her recollections.

* has since appeared in tv most memorably in 'Brideshead Revisited, as Faith Ashley and 'A Voyage Round My Father', opposite Laurence Olivier and other parts until the role of Sally in 'The Old Guys'.

* has written 3 best-selling novels and more than a dozen lifestyle, costuming, and cake decorating books and runs a company making party cakes and sugar crafts for special occasions.

* is President of 'Arthritis Care', a 'Distinguished Supporter' of the 'British Humanist Association', President of the 'National Autistic Society' and the President of 'Parkinson's UK'.