Britain's old men take heart, at 70 your happiest days are yet to come 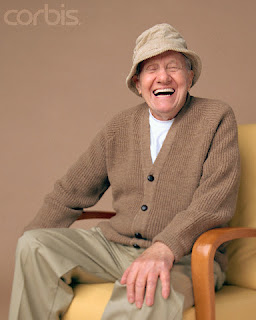 An article in the 'Daily Mail' announced that :
We are happiest after we retire and DON'T become grumpy with old age, say scientists

'If your carefree youth is a distant memory and you’re entering middle age with a sense of gloom . . . cheer up. The happiest time of your life is probably yet to come'.

* the demands of work and family may steadily erode our youthful sense of well-being as we reach middle age, but research suggests, it returns in our later years.

* it is after 70 that we are likely to be at our happiest – as long as we enjoy good health, have sufficient income and are not lonely.

The conclusions are highlighted in a new book by Lewis Wolpert, the 81-year-old 'Emeritus Professor of Biology' at University College London, entitled 'You’re Looking Very Well.'

Lewis has said : ‘What emerges is that people in their teens and twenties tend to be averagely happy but this declines steadily until early middle age. But from the mid-forties, people tend to become ever more cheerful, perhaps reaching a maximum in their late seventies or eighties.’

A study of 341,000 people by the 'National Academy of Sciences' in America showed that overall enjoyment of life tended to decline slowly throughout early adulthood, rising again from around the late forties or early fifties to reach a maximum around the age of 85.

Similarly, the 'English Longitudinal Study of Ageing', which has tracked more than 10,000 people over 50 since 2002, found at least half experienced an increase in well-being.

The message is simple :