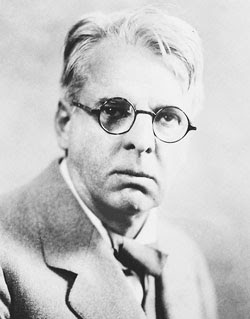 W.B.Yeats, the Irish poet, was 60 or 61 when he wrote 'Sailing to Byzantium' and created the expression 'No Country for Old Men' in 1926.

* a statement about the agony of old age and the imaginative and spiritual work required to remain a vital individual even when the heart is 'fastened to a dying animal'.

* his solution to the agony is to leave the country of the young and travel to Byzantium, where the sages in the city’s famous gold mosaics could become the 'singing-masters' of his soul.

* an expression of his hopes that the sages will appear in fire and take him away from his body into an existence outside time, where, like a great work of art, he could exist in 'the artifice of eternity.'

* his declaration that once he is out of his body he will never again appear in the form of a natural thing; rather, he will become a golden bird, sitting on a golden tree, singing of the past, 'what is past', the present, that which is 'passing' and the future, that which is 'to come'.

Yeats wrote in a draft script for a 1931 BBC broadcast:

'I am trying to write about the state of my soul, for it is right for an old man to make his soul, and some of my thoughts about that subject I have put into a poem called 'Sailing to Byzantium'. When Irishmen were illuminating the Book of Kells, and making the jeweled croziers in the National Museum, Byzantium was the centre of European civilization and the source of its spiritual philosophy, so I symbolize the search for the spiritual life by a journey to that city.'

I
That is no country for old men. The young
In one another's arms, birds in the trees
---Those dying generations---at their song,
The salmon-falls, the mackerel-crowded seas,
Fish, flesh, or fowl commend all summer long
Whatever is begotten, born, and dies.
Caught in that sensual music all neglect
Monuments of unaging intellect.

II
An aged man is but a paltry thing,
A tattered coat upon a stick, unless
Soul clap its hands and sing, and louder sing
For every tatter in its mortal dress,
Nor is there singing school but studying
Monuments of its own magnificence;
And therefore I have sailed the seas and come
To the holy city of Byzantium.

III
O sages standing in God's holy fire
As in the gold mosaic of a wall,
Come from the holy fire, perne in a gyre,
And be the singing-masters of my soul.
Consume my heart away; sick with desire
And fastened to a dying animal
It knows not what it is; and gather me
Into the artifice of eternity.

IV
Once out of nature I shall never take
My bodily form from any natural thing,
But such a form as Grecian goldsmiths make
Of hammered gold and gold enamelling
To keep a drowsy Emperor awake;
Or set upon a golden bough to sing
To lords and ladies of Byzantium
Of what is past, or passing, or to come.
Posted by ...............................JohnBoy at 22:43

Labels: W.B.Yeats and No Country for Old Men