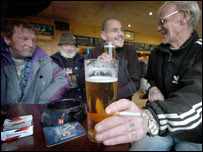 Old men in Britain are living longer to an average age of 77.9 years but those living in the North live shorter lives than those in the South and this north-south divide has worsened over the last decade.

An 'Office for National Statistics Report' has shown that variations in income, socio-economic status and health behaviour continue to take their toll and life expectancy for both sexes in Glasgow is lower than in Albania and nearer to that of the Palestinian Territories than to the wealthier London boroughs.

These are the figures for average life expectancy for old men :

The charity 'Age Concern UK' expressed regret at the continuing variations and Director Michelle Mitchell said:
"As the state pension rises to 66 by 2020, it is people living in poorer areas with lower life expectancies who will see their retirements cut short."
She warned that the Government should be "extremely cautious" about any further increases to the state pension age, urging ministers to ensure those with the poorest health and low life expectancy were not disadvantaged.

Talking of the north-south divide in Britain Dr Simon Szreter, Professor of History and Public Policy at Cambridge University, said:

"Life expectancy has a longstanding correlation with social class and income. This north-south divide is explainable in terms of the lack of members of middle-class households in the north and the disproportionate concentration of them in the south. During the last two decades, class has become more closely tied to income. Income inequality has gone up significantly."